The day after President Obama’s pro-climate-action State of the Union address, I found 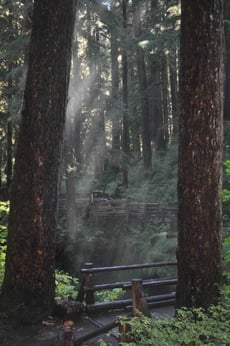 myself having lunch with Lisa Reddick, a professor of Ecopsychology at Antioch University Seattle. Reddick and her boss, Dean of Psychology Jane Harmon Jacobs, were celebrating Obama’s speech, noting how dramatically his language has evolved. There was no ambivalence when he talked about the “overwhelming judgment of science” on climate change and proposed a definitive and permanent solution, that “we shift our cars and trucks off oil for good.”

And yet only a few weeks before Obama’s speech, Anthony Leiserowitz, Director of the Yale Project on Climate Change Communication, sounded much more pessimistic. In an interview with Bill Moyers called “Ending the Silence on Climate Change,” Leiserowitz describes how deeply the fundamental question that Ecopsychology asks is embedded in our culture, and explains how human evolution is inseparable from the climate system:

I think one of the most interesting things that comes out of science that challenges some of our long held cultural beliefs that somehow human beings are fundamentally different than the natural world is the recognition that at root, when you look at the DNA, we are kin. We are literally relatives. Does that change the way you perceive your relationship with the rest of the world?

Obama talks about changing policy. Leiserowitz talked about changing the most basic understanding of who we are as humans. Obama’s change will affect some sectors of America. Leiserowitz would change everything, from business and government to the hard sciences to social sciences such as economics. One example: a look at the sustainability performance of nearly 7,000 public companies on CSRHub.com tells you that of the twelve socially responsible categories they measure, those involving employees and social issues have higher average scores  than the performance ratings on energy and environmental management.

Overturning the assumption that humans should dominate the earth is as world-altering as Copernicus insisting that the earth revolves around the sun. And yet overturning that assumption is exactly what we must do, not only to save our ourselves from the effects of climate change, but also, if Ecopsychology is correct, to preserve our mental health.

A report released in 2012 by the National Wildlife Federation (NWF) supports this hypothesis. Called The Psychological Effects of Global Warming on the United States: And Why the U.S. Mental Health Care System is Not Adequately Prepared, the report describes the alarming increase in mental health trauma due to weather related disasters, and predicts even higher rates of depressive and anxiety disorders, post traumatic stress disorders, substance abuse, suicides, and widespread outbreaks of violence.

This is just what Ecopsychology anticipates. Founder Theodore Roszak recognized the problems stemming from separation of man and nature, the failure to recognize nature’s value to the human spirit and its potential for healing and harming.  In Roszak’s seminal work on Ecopsychology, The Voice of the Earth, Roszak argues that modern psychiatry "has...cut itself off from nature at large and [ministers] to the psyche within a purely personal or social frame of reference.” Nature is relegated to a hostile, alien force.

Professor Reddick is seeking to change this belief through language and stories. Her exemplar is Rachel Carson,  “…a scientist who was able to write to the people in a way that moved them with words like ‘Silent Spring’ (referring to birds silenced through use of toxic chemicals in farming) instead of ‘Oh my gosh run for your lives DDT is everywhere...’” Her students practice their art at Today’s Weather, blogging about the impact climate change has had on their senses. Their language can be apocalyptic but is just as often resilient and hopeful.

Politicians are finally willing to support climate action to preserve our way of life.

Proponents of Ecopsychology and other conservationists argue that only when we feel the exhilaration of our true place in the universe can we be healthy in not only body but mind and spirit too. It’s an agenda as overwhelming as reversing climate change. Shouldn’t they go hand in hand?