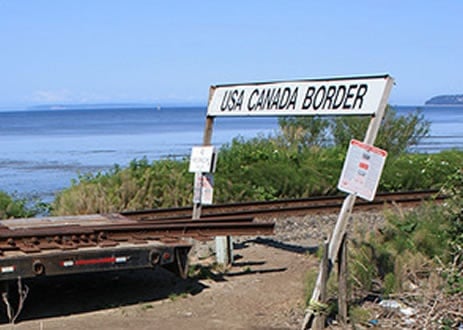 du Vent restaurant in the picturesque beach town of White Rock, British Columbia.  As the waitress was serving lunch, a train filled with coal passed between the restaurant and Semiamoo Bay. After her view cleared and the noise had abated, my friend mentioned her fear of the coal ports proposed for five Pacific Northwest sites and the harm to health the coal dust would inflict.

The waitress claimed empty cars were the worst offenders. Her house is covered with dust that is not tamped by the surfactant sprayed on full coal loads. Black soot enters through her windows to rest on blinds and furniture. Colors in her early spring flowerbed are greyed. She was too young to think about health impacts, but her images were heartbreaking.

The next day, still recovering from my friend’s apocalyptic nightmare and its implications for proposed coal ports near me in Washington State, I stopped everything to read the Sightline Weekly Newsletter headlined “Coal Exports: Two Weeks of Good News.”

Sightline has been investigating Pacific Northwest coal ports permitting since the beginning and has an exhaustive blog series on the subject. The series often chronicles the bad news, including the dispiriting number of strategy and PR firms under contract with coal companies and law firms with deep ties to the industry.

So what’s the good news? Small actions really do add up, and it looks like the coal ports issue may have reached a tipping point. As Sightline’s Program Director Clark Williams-Derry says, “When you string together all the new developments, there are more and more signs that coal export proposals are on the ropes.”

Williams-Derry’s article lists seven positive developments, the most impressive of which is that the coal port project at Coos Bay, Oregon was shut down. The last remaining partner, Metro Ports, withdrew after both Mitsui and Korea Electric Power Corp dropped out last month. “The port is moving on to the next phase,” said port CEO David Koch.

What killed Coos Bay? The port’s press release blames it on an group led by the Sierra Club, whose arguments were both environmental and financial: Asian demand for coal is falling as pollution and the effects of global warming grow.

These realities came first to the Asian partners, who suffer directly from coal pollution. Beijing’s heavy coal smog drifts to Tokyo, headquarters for Mitsui; the two cities have entered an agreement to pursue technical solutions. Seoul, headquarters for Korea Electric Power, has levels of sulphur and nitrogen oxide from coal burning in China that were four times over the acceptable level and is equally eager to forestall more coal burning.

Korea Electric’s decision was undoubtedly due to financial reasons as well. As the Huffington Post reports, a spokesperson for Korea Electric blamed the timing of the investment. But like the waitress in White Rock, company decision-makers from both Asian investors in Coos Bay had personal experience with coal’s mal effects. And they are certainly interested in their company’s financial health. But when coal smog affects their families, profit becomes secondary.

And there are plenty of personal experiences standing in the way of coal ports:

You might think that the only way these massive coal port projects can be stopped is by an equally massive force. And yet, that turns out not to be the case. It’s an executive in Korea, Native-Americans in Washington, lots of people protesting online, and a waitress in White Rock stirring up people who live 100 miles away. It takes the global village. Let’s hope the efforts continue.