Is The Correlation Between Brand Strength and Sustainability Due to Random Chance?

In the previous posts in this series, we showed that there is a strong correlation between brand strength as measured by the Brand Finance Brand Strength Index and sustainability as measured by CSRHub’s metrics engine.  We promised to examine more closely whether or not the correlation we discovered is meaningful. 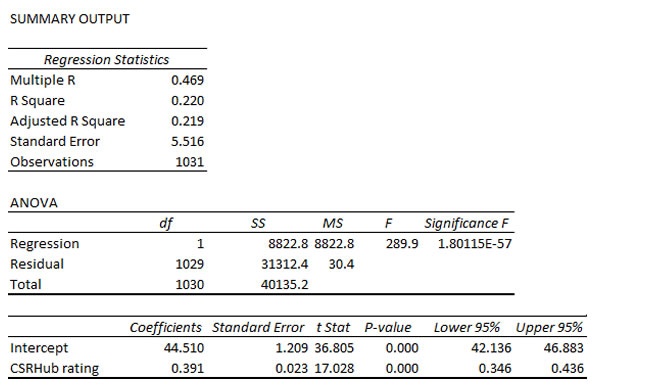 Another test is to see if splitting a data set randomly into two groups causes any change in the observed correlation.  This simple test often reveals that a correlation comes from the combined effect of a few outliers or some other artifact of the data.  We used a random number generator to divide our scores in half.  Of course, splitting the data set reduces the total number of data elements in each sample.  However, over several trials, our correlation coefficient remained between 0.21 and 0.23.

Is the Relationship Spurious?

Could we be seeing only a spurious relationship between our data sets that is caused by them both being correlated with a third factor?  It is impossible to rule out this type of problem—there are too many possible third factors to consider.  However, we can at least test a couple reasonable alternate explanations.

For instance, could both brand strength and sustainability be positively correlated with enterprise value?  We have tested this idea and see that while there is a fairly strong correlation between BSI and enterprise value, there is only a weak correlation for CSRHub’s ratings.

Comparison of Correlation With Enterprise Value for BSI and CSRHub Rating

If we include enterprise value in our regression, the correlation coefficient between enterprise value plus CSRHub score and the Brand Strength Index rises to 0.39.  The T statistics for both the CSRHub rating and enterprise value dependent variables are highly significant--well above the 3.3 needed to support a 99.9% confidence that these correlations are non-zero.  From this, we can conclude that enterprise value could explain a portion of the relationship between brand strength and sustainability, but not all of it.

Correlation Between BSI and Both Enterprise Value and CSRHub Overall Rating 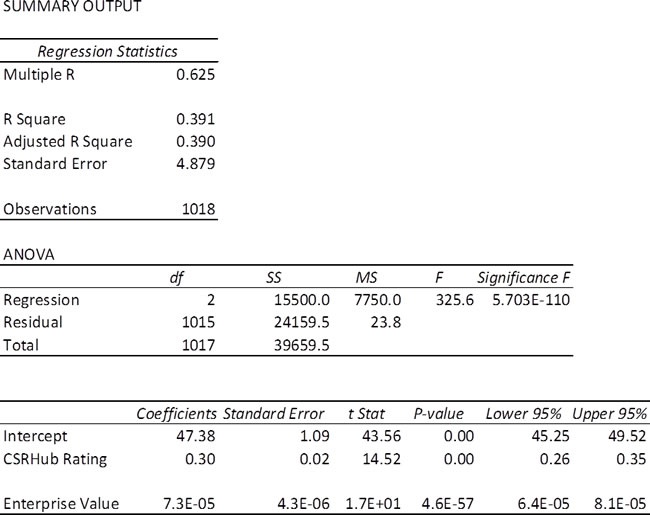 Could the correlation we have discovered exist only for companies in “branded” industries and not true for other areas?  We split our sample and examined the correlation for each type of company.  As you can see, there appears to be relatively little difference in the correlation by industry type.

Comparison of Correlation for Brand-Focused and Non-Brand Focused Companies

As we noted in our previous post, correlation is not a proof, but it can be a “hint.”  We believe that we have shown strong evidence that brand and sustainability are connected.  We will next look at how that relationship has changed over time.