For many years, I have rooted for the free market to fix the problem of climate change. I believe in innovation and the power of entrepreneurship. I watched industry transformation 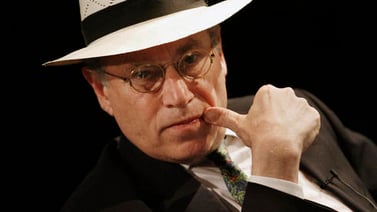 real-time in the communications industry. I saw MCI win its suit against AT&T and the Federal Justice Department break up the phone monopoly. MCI’s Chairman John McGowan’s guiding philosophy after the break-up in 1980 was that the telephone has instantly become a computer. At that very moment, computing entered the home and I had a job for 30 years, through revolutions in telephony, data and broadband.

I saw it happen and I knew it could happen again with climate change.

The pieces are all in place. Public opinion on climate change is largely supportive. Mainstream media is reporting regularly on sustainable businesses, natural resources and industry transformation.

From electric vehicles to renewable energy to LEED buildings, environmental innovation has driven transformations in industry after industry. These innovations promise rapid growth and insure profitable futures. And yet, the fossil fuel industry, the primary source of climate change, has failed to transform itself for the new reality. Why?

Daniel Ravensbergen of DeSmog Canada offers a possible explanation. In his recent blog “Why Hasn’t the Free market Solved Climate Change?” he makes a case that it’s not that business doesn’t plan for the most likely future.  Or that fossil fuel company employees are all climate deniers. Or even that players really are that greedy. Why then has free market capitalism failed to generate technological solutions to climate change?

Even as extreme weather wreaks havoc on crop yields and threatens coastlines, new custom-made financial instruments offer the savvy investor the chance to profit from destruction. (Originally developed for farmers,) weather derivatives offer both a profitable investment today and an insurance policy against future damages by flooding or drought. While the estimated costs of climate change continue to climb, the profits to be made by betting on those costs keep growing faster.

Green innovation simply isn’t as profitable as speculation. In an era when financial markets generate record profits and investment banks are too big to fail, the long work of investment, research and construction of new energy infrastructure simply isn’t attractive to profit-seeking corporations.

Richard Sandor is the “Father of Derivatives” who founded the original market for carbon, the Chicago Climate Exchange (CLE). He is not only a financial icon but is also, ironically, one of Time Magazine’s Heroes for the Environment. I’ve heard him speak and he can be charismatic and brilliant.

Of course a genius is going to suffer attacks, and not just from ideological opponents, but Sandor’s financial innovations have even the smartest financial pros fulminating. Former Federal Reserve Chief Paul Volker said derivatives have taken the economy “right to the brink of disaster.” Warren Buffet called them “financial weapons of mass destruction.” Steffen Böhm, director of the Essex Sustainability Institute at the University of Essex contends that “Carbon markets have lost us more than 15 years in the battle against climate change.”

Besides, Sandor is no saint. Fond of sporting mob-style Fedoras, Sandor raised eyebrows when his carbon exchange was sold to International Exchange and he made $98 million.  Since then, he has joined the board of Volatility Exchange which makes bets on realized volatility of derivatives. Huh?

But it’s in his second article that Ravensbergen offers the ultimate damnation for Sandor’s environmental schemes, the utter failure of carbon trading markets:

The world’s largest market, the European Union Emissions Trading Scheme (EU ETS), is failing. The European system is awash in excessive permits, meaning that the price of emitting carbon is so low that corporations have no incentive to clean up their production methods. At the global level, the United Nations Clean Development Mechanism (CDM) is suffering a similar fate.

One of the staunchest critics of the emissions trading approach is NASA climate scientist and activist James Hansen. Hansen has accused carbon markets of failing to rein in emissions and allowing “polluters and Wall Street traders to fleece the public out of billions of dollars.”

Maybe financial innovation just doesn’t mix with environmentalism. Rather it’s the production side of capitalism, where product innovation should happen. I think about the progress we might have made if the Sandors of the world were creating value in industry transformation instead of financial betting parlors. What a waste.

CSRHub provides access to corporate social responsibility and sustainability ratings and information on 8,400+ companies from 135 industries in 104 countries. By aggregating and normalizing the information from 257 data sources, CSRHub has created a broad, consistent rating system and a searchable database that links millions of rating elements back to their source. Managers, researchers and activists use CSRHub to benchmark company performance, learn how stakeholders evaluate company CSR practices and seek ways to change the world.