The Pause that Invigorates Environmental Progress

Last year, we had eleven weather catastrophes that caused over $1 billion in damages. This year, we’re only at one.

I know there was some severe weather this summer. The half-mile wide tornado in Oklahoma was horrifying. But along the corridors of East Coast power, the weather was, according to the Washington Post, “… a breath of fresh air compared to the previous three (the three hottest on record).”

I experienced a great summer for the first time since I moved to Seattle four years ago. In 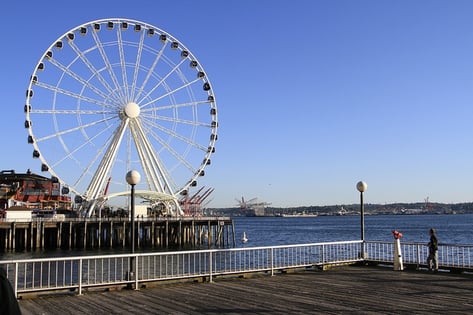 a part of the country that’s usually rainy and often cold, Seattle was often warmer than Los Angeles. We had sunshine nearly every day.

I worried that lack of disasters would take climate change out of the headlines and off the radar, both locally and nationally. Issues with potentially enormous environmental consequences, such as the Keystone Pipeline, West Coast coal trains, and pending EPA regulations on coal-burning utilities were all coming to a head. Would the nice weather reduce the will to act on these?
The evidence points to the opposite. Obama’s announcement last Friday that he would impose carbon emissions limits from coal-fired power plants is something he first talked about in his 2008 Presidential campaign. Yet the announcement just came two days ago. The EPA’s new director Gina McCarthy testified last week before the House Committee on Energy that the agency had worked with “states, utilities and other key stakeholders to develop plans to reduce carbon pollution from future and existing power plants, which are responsible for about 40 percent of America’s carbon pollution.”
The Keystone Pipeline, once deemed “inevitable” by energy titans such as Marathon Petroleum, now seems far from certain as resistance gathers strength, most recently Saturday’s 350.org “Draw the Line” protest in over 200 US locations.

Northwest coal port proposals are withdrawn one by one, as oppositional forces multiply, from the market’s 40% drop in overseas coal prices to a suit brought by the Lummi Nation claiming loss of livelihoods.

These advances in macro policy have been on the back burner for years if not decades, and suddenly they’re all heading towards climate-friendly resolution. Pro-environmental solutions are happening on the micro level too, at least out here. Walking and biking are up in our cities. Seattle commuters driving alone has fallen below 50%, joining Boston, New York, Washington DC and San Francisco, while biking, walking and public transportation use are all up. Changing commuter habits have prompted Seattle’s plan to transform parking lots to parks, and the first lot was converted to an urban Parklet just last week. To the south, ride-sharing was finally legalized in California last week, providing regulations that pave the way for other states.

It’s as if the sunshine has given us the pause we needed at just the right time. When the weather is a disaster, all we can think about is bouncing back from the catastrophe. Resilience and recovery are our priorities. When we’re not fighting for survival, we have a pause when we can reflect and evolve to the next level.

Mother Nature seems to be cooperating in other ways too. The so-called “global warming hiatus” attributed to lower temperatures in the Pacific Ocean has slowed increases in surface temperatures and allowed arctic ice to grow 60% in 2013.

We have a grace period. It looks like we’re using it wisely.