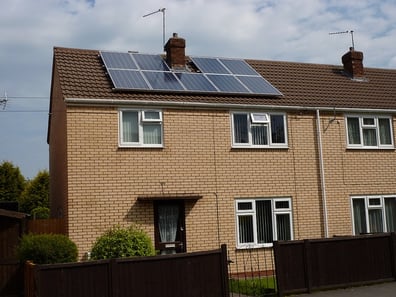 for any number of reasons. Ikea may be a leader in renewable energy for its own operations, with over half a million solar panels installed on its store and factory roofs and a fleet of its own wind turbines. But solar power for its customers?

From a business perspective, it makes little sense. Margins on solar panels are very thin, especially at Ikea’s prices. And this year, with China suppliers awash in panel inventory, wholesale panel prices have been extraordinarily low.

Ikea’s one year pilot project at its Lakeside UK store near London sold “one photovoltaic (PV) system almost every day.” They’re not running out the door, despite generous government incentives in the UK.

PV systems require a new business model for Ikea, requiring installation and maintenance services. Ikea’s panel supplier is Hanergy Holding Group Ltd, a privately-held Chinese company whose panels may be subject to “quality, environmental, after- sale service and product warranty concerns.” One wonders how quickly other franchise owners will take on the reputational risk of the solar panel business.

If Ikea decides to roll out its solar panel program in the U.S., it will face competition from stores experienced in home installations such as Lowes and Home Depot, which has been advertising and installing solar panels since 2005 through its partnership with BP.

There are plenty of potential problems with Ikea’s solar panel business. But from a branding perspective, it makes total sense. As early as 2003, culture watchers, environmentalists and even designers have found fault with the underlying ethic of Ikea’s approach. In a short piece on ethics in graphic design, Ikea is charged with designing its products with planned obsolescence in mind. In 2009, Salon reviewed Cheap: The High Cost of Discount Culture, Ellen Ruppel Shell’s criticism of our cycle of consumption that is destroying the environment and harming labor as well. Focused on discount chains like Wal-Mart and Target, Shell “gently damns” Ikea for its cheap, disposable products that are as bad for the environment as Wal-Mart’s. The environmental blog along the trail aptly called Ikea “consumerism on steroids.”

A recent glance at Ikea’s U.S. consumer web site reinforces this idea: most of the site’s new offerings are doo-dads and children’s toys.

Now, with its solar offerings, negative impressions associated with Ikea’s disposable “stuff” could be tempered by solar panels in the stores. The company’s 2012 Yearly Summary launched its campaign of “People & Planet Positive.” But the greenwashing of the last two decades has put consumers on alert to eco claims that are mere promotion. Ikea’s success with solar panels to generate energy for its own use has been much ballyhooed. Solar for consumers is its next big chance to reinforce its good guy mantle.

Not a moment too soon. A new study by BBMG, GlobeScan and SustainAbility found that—

“…the sustainability proposition has changed from being the ‘right thing to do’ to being the ‘cool thing to do’.  …For decades, green marketers have been speaking to the wrong consumers, assuming that by engaging the most committed ‘advocates’ we would create significant business growth, cultural relevance and change at scale. What makes Aspirationals so compelling is that they combine an authentic commitment to sustainability with a love of shopping, design and social status, aligning economic, cultural and social forces to shift the way we shop.”

For consumers, Ikea’s long-admired design sensibility is intertwined with its sustainability. The chain’s commitment to affordability doesn’t have to fight with perceptions of sustainability. But Ikea must tread very carefully to preserve all three. A potential money-loser like solar panels could boost its environmental reputation and enhance its brand’s coolness. After all, the announcement about its UK stores carrying solar panels was carried widely across U.S. consumer, environmental and business media. So far, it looks like a branding home run.

CSRHub provides access to corporate social responsibility and sustainability ratings and information on 8,300+ companies from 135 industries in 104 countries. By aggregating and normalizing the information from 270+ data sources, CSRHub has created a broad, consistent rating system and a searchable database that links millions of rating elements back to their source. Managers, researchers and activists use CSRHub to benchmark company performance, learn how stakeholders evaluate company CSR practices and seek ways to change the world.