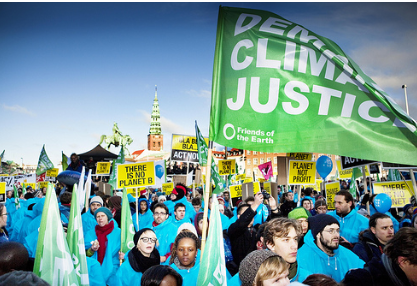 First, Huffington Post reported on predictions from the International Energy Agency (IEA) that the U.S. will by bypass both Saudi Arabia and Russia in oil production by 2016 “at the latest,” a year earlier than it predicted in 2012. The U.S. will be world leader in oil production, subsuming climate to energy self-sufficiency.

The second astonishing headline covered the Climate Accountability Institute’s most recent study, as reported by Suzanne Goldenberg for The Guardian: “Just 90 companies caused two-thirds of man-made global warming emissions.” The list is topped by state-owned monopolies in China and Russia, with well over 8% each, and includes 50 fossil fuel investor-owned firms, including such widely recognized brands as Chevron, Exxon, BP, Royal Dutch Shell, British Coal Corp, Peabody Energy and BHP Billiton.

The list’s top 20 produced nearly 30% of historical emissions. Chevron alone produced 3.5% of total global emissions and Exxon produced 3.2%; the U.K.’s BP and Shell are close behind. We’ve known the primary sources of carbon emissions for some time, but this study quantifies the relative damage each has done. It’s shocking all over again.

The third depressing headline is about the failure of the UN Framework Convention on Climate Change which just concluded two weeks of meetings in Warsaw on Friday. As the New York Times reported, talks stalled because the developed countries refused to pay the $100 billion they’d promised to underdeveloped countries, which suffer the worst of climate change impacts.

But it’s not just developed countries that are responsible for emissions. As Naomi Oreskes, professor of the history of science at Harvard and co-founder of the Climate Accountability Institute, explained in The Guardian article, "There are all kinds of countries that have produced a tremendous amount of historical emissions that we do not normally talk about. We do not normally talk about Mexico or Poland or Venezuela. So then it's not just rich v poor, it is also producers v consumers, and resource rich v resource poor ."

Not surprisingly, the entities most at fault for carbon emissions flaunt their disdain for the U.N.’s process. As evidence, the environmental NGO 350.org cites this fact: “The Polish government not only allowed corporate sponsors for the talks, but co-sponsored a major coal summit during the negotiations. It’s hard to see the U.N. gaining any traction around proposed financial consequences for countries.

But there are consequences for investor-owned companies. We know who those companies are, and now we know how much each is to blame.

Compare the problem of assigning blame and penalties for emissions to the 2008 financial crisis. At first, the task seemed impossible. It was too complex. The problem was systemic. Those who might be at fault were just too powerful. There was no way to parse the blame.

But with the force of public outrage and regulatory will and enough time to unravel specific causes, that’s changing.

Five years later, JP Morgan is the first to be fined, $13 billion for corrupt mortgage practices alone. And while many argue that financial penalties have not hurt the bank, it suspended stock buybacks last year and more could happen again to accommodate growing fines and penalties. And at least one analyst, Oppenheimer’s Charles Peabody, cut the bank’s 2013 earnings estimate by 12.5%.

So far, the only blame fossil fuel companies have suffered has been for oil spills such as Chevron’s currently contested $19 billion fine for polluting in Ecuador. But fossil fuel industry hubris towards global warming is pushing the same combination of public outrage and regulatory will as resulted in financial penalties for powerful banks. And now, thanks to the IEA report, we have the piece that took longest in punishing the banks, a way to quantitatively parse blame.

It’s a long game but it looks like the most recent combination of events —the U.S. becoming the world’s top oil producer, specific emissions numbers making it easier to assign blame, and failure at the U.N. — might just enable a remedy, at least in the U.S., forcing financial penalties on fossil fuel companies that more accurately reflect their true costs.