One of the more solid tenets of Big Oil dogma has always been that carbon pricing, whether 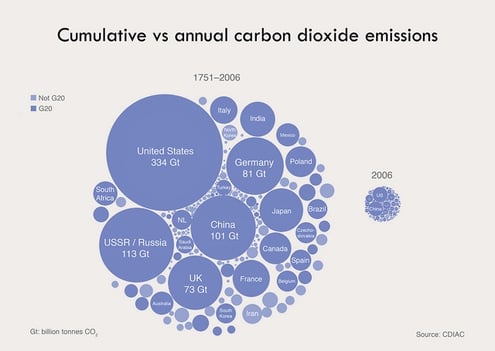 a simple tax or a market-based cap-and-trade system, is terrible and conservatives must stand in unison against it. Daily Caller reporter Michael Bastach, a former Koch Institute Intern, confirmed this recently: “This vote against a carbon tax in the (American Legislative Exchange Council) ALEC meeting in Chicago … comes after Republicans in both the House and the Senate voted unanimously against a carbon tax earlier this year.”

So it was a surprise to read the December 5 New York Times headline “Large Companies Prepared to Pay Price on Carbon.” Seemed a leap from what the real news was: according to the article, Carbon Disclosure Project, now CDP, released research findings that big companies have been figuring a carbon tax into their financial models for some time.

Well, of course they have, and we knew that.

CDP itself said as much. Its 2012 report predicts that companies will act ahead of regulation: “80% of the Carbon Disclosure Leadership Index (CDLI) include climate change information in their annual reports (non-CDLI: 49%).”

And California is implementing Cap and Trade.

The non-news “news” made the top right hand column of the New York Times front page, placement reserved for the day’s most important story. The same story seemed to appear everywhere at once, from Huffington Post’s Politics Section to Reuters and a week later, Forbes.

But still, why is this major news? And why now?

Certainly, the media has recommitted to environmental coverage. New York Times Public Editor Margaret Sullivan ended her impassioned commitment to environmental reporting with a quote from Al Gore, “The survival of human civilization is at risk. The news media should be making this existential crisis the No. 1 topic they cover.” The heat is on.

But my bet is that the news included, for the first time, the specific price per ton for carbon that each company is using. Exxon’s bet is $60; BP and Shell use $40; the lowest number is $6. CDP’s mission is to give investors data they can use to motivate companies to disclose their environmental impacts and take action to reduce them. It’s difficult for investors to make risk projections based on generalized corporate statements of intent. Much easier when the company publishes actual cost projections, as the respondents to CDP did. More than just another admission of responsibility, this is vital news for investors and confirms that CDP respondents are serious about carbon pricing.

According to CDP, if oil and gas companies don’t come out for carbon pricing, the risk is delayed projects, further divestment pressure and, at the worst, threats to their license to operate.

Even when carbon pricing is enacted, profits will be safe. Consumers will end up paying for carbon taxes in any guise through higher energy bills, as they have in the past.

Stock prices won’t be hurt – in fact, investors like the certainty of carbon pricing. MarketWatch said of the announcement, “Big Oil is straying from conservative orthodoxy and making long-term financial plans under the assumption the government will force them to pay a price for carbon pollution as a way to control global warming — and Exxon Mobil Corp is better prepared than others to face the new expense” because of its investments in natural gas, which has lower measurable emissions.

The potential opportunity from Big Oil embracing carbon pricing and accepting its responsibilities, as Exxon did in openly acknowledging to the New York Times that carbon pollution from fossil fuels contributes to climate change? A reputational turn-around that could result in higher stock prices.

The most cynical explanation for the timing of the “news” is that that Big Oil is looking at carbon prices as a distraction from the real threat that fossil fuel production will be regulated out of business. They stimulated salacious delight in exposing their actual numbers and changed front page chatter from what had been dominant, that major public funding sources from the Ex-Im Bank to the World Bank would no longer lend to coal projects. When the administration nearly doubled its internal carbon price earlier this year, energy companies immediately jumped in – to demand the calculations be open to public comment. Carbon pricing wrangling could divert the media from more important stories.