Newsweek’s Green Rankings Is Back

After an eighteen month break, Newsweek has re-launched its Green Rankings.

On June 5, it issued new ratings for the 809 companies that are on either the US 500 or Global 500 lists. The Green Rankings list is likely to continue to draw attention to corporate social responsibility performance and we are glad to have it back. We hope that Newsweek will continue to publish and promote work in this area.

Over the past few years, Newsweek’s Green Rankings had become one of the best known corporate CSR rating metrics partly because of its simplicity (everyone likes a top to bottom ranking) and because Newsweek’s large circulation put it in front of millions of ordinary consumers.

For several reasons we explain below, the Newsweek Rankings may not be a good benchmarking or best practices discovery tool for the sustainability professional.  In fact, as in past years, the new rankings are likely to continue to generate anxiety and confusion, as we all try to puzzle out and decode the signals they offer on how the world’s largest companies are performing.

Newsweek’s methodology for calculating the ratings has changed several times.  This year’s revamp is pretty radical.  The initial data set for the 2014 list was supplied by Bloomberg and RepRisk.  Bloomberg captures a wide range of environment, social, and governance (ESG) from company financial disclosures, sustainability reports, and other public documents.  Bloomberg also ingests data from CDP—formerly the Carbon Disclosure Project—on carbon and water-related issues.  RepRisk has one of the world’s largest databases of corporate risk information.  Newsweek arranged for Corporate Knights, a well-respected Canadian research firm, to review these data sets.  It also sent a survey to 775 of the 809 companies. It is interesting that they could only find contact info for 95% of these very large companies—and that only 363 of them or 45% of the sample set responded.  Corporate Knights may also have consulted some of the other data sources it has available, such as MSCI’s Intangible Value Assessment (IVA) and Thomson Reuters Asset4 databases.

The 2012 Newsweek list included data from Sustainalytics—a full service ESG ratings firm—and Trucost—one of the leading suppliers of carbon, water, and other environmental information.  The 2012 list dropped an interesting and deep source of CSR data that was in the 2011 list—expert opinions on CSR performance that had been gathered by Corporate Register. The 2012 list had a strong emphasis on environmental performance, driven perhaps by a desire to make the list a “Green” ranking.  For the 2014 list, Corporate Knights decided to explicitly include corporate risk, board involvement, management compensation, and credit for outside assurance to its criteria.

We have ingested most of the sources from both years’ methodologies into our database, including RepRisk, Trucost, Asset4, CDP, and MCSI’s IVA.  As do many of the 300+ sources we studied, Corporate Knights studied the publicly-disclosed information that Bloomberg collects.  So, we would expect to see a fairly high correlation between our ratings (which measure the overall perceived sustainability performance of companies) and Newsweek’s scores.  The chart below shows that we had a 35% correlation between our scores and the Green Ranking scores, for the 2014 US data. 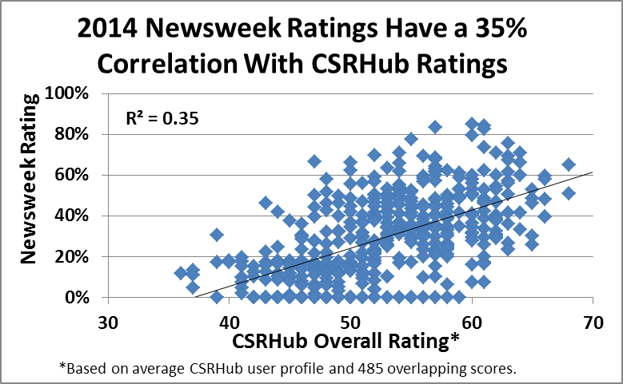 Interestingly, this year’s ratings for the US 500 seem somewhat less correlated with our overall ratings than they were in the past. 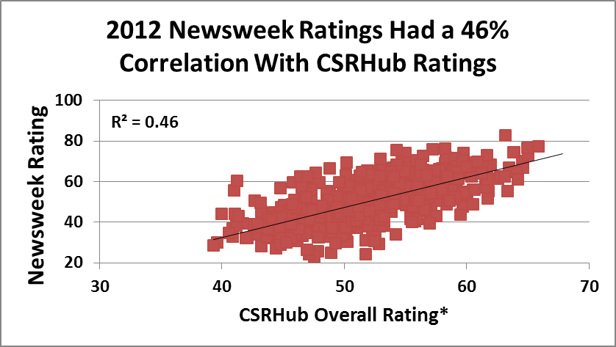 We believe these factors may have driven this shift:

As with any rating system, we could find fault with some of the individual results within the Newsweek Green Rankings.  For instance, Campbell Soup has a 67 overall rating in CSRHub.  This puts it third in the list of 216 food companies that we track.  Campbell supports BCCCC, CECP, and the Sustainable Packaging Coalition.  It was on Corporate Knight’s own Global 100 list in both 2013 and 2014.  But, Campbell gets only a 39.6% score in the Green Rankings system.

Inconsistencies between rating systems reinforce the need for corporate sustainability managers to focus on broad measures of performance that are stable across industries, geographies and time. Again, we applaud Newsweek for raising awareness of sustainability across a wide audience. Professionals in the field should feel free to use CSRHub data dating back to 2008 to get an independent perspective on the hundreds of sustainability metrics that are produced each year.

CSRHub provides access to corporate social responsibility and sustainability ratings and information on 8,900 companies from 135 industries in 102 countries. By aggregating and normalizing the information from 325+ data sources, CSRHub has created a broad, consistent rating system and a searchable database that links millions of rating elements back to their source. Managers, researchers and activists use CSRHub to benchmark company performance, learn how stakeholders evaluate company CSR practices and seek ways to change the world.