There are many world problems that we don’t experience personally.  I got “concrete proof” last week of one that I’d only heard about abstractly, before.

I was scurrying to a meeting in Midtown.  I got to the corner of Madison and 43rd and was just going to cross the street when something on the sidewalk caught my eye.

It was a colorful bird’s severed head.  New Yorkers swirled past me on all sides, threatening to stomp on it with their stilettos or smash it with their rolling bags.  I looked upwards and saw the sheer sides of a towering, stone and glass faced office building.  Then, I remembered an article I’d seen recently that estimated that 25,000 birds die each year, when they crash into New York City skyscrapers. 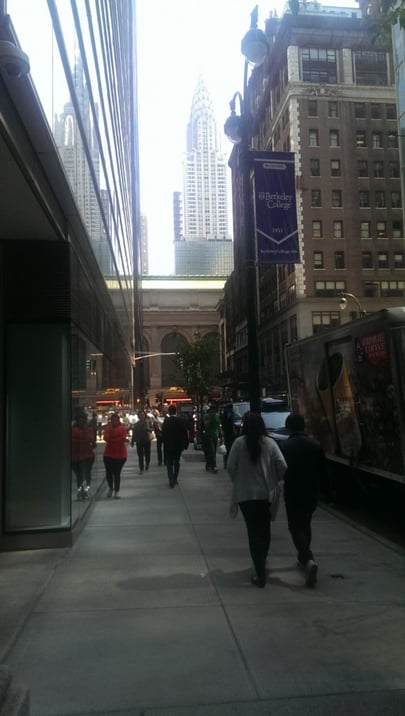 43rd and Madison—the bird is on the right.

New York sits in the middle of a major bird migration route.  Each year, birds of all sizes and shapes stop off in the swamps and fields of the Hudson River’s delta to have a bite to eat, take sip of water, and rest a bit.  Many of them show up late in the day or travel at night.

As birds fly through our area, they get confused by the lights on our buildings or fail to avoid the large, dark, reflective windows that we’ve coated them with.  This is apparently not a new issue.  For example, here is a quote from an old newspaper report: “On the evening of 22 August 1888, after a cold front passed through New York City, almost 1,500 migratory birds were found dead below the nearby Statue of Liberty, apparently drawn to the newly installed electric lights on the statue.”  The problem is also not unique to New York City.  Portland’s extensive guide for making buildings “bird safe” cites a scientific estimate that 34 million birds die each year in the US from collisions with buildings.

The article that made me aware of the problem spoke of building workers whose daily ritual included sweeping up piles of dead and damaged birds.  When I thought of how sad my one example made me, I knew I’d found another job I couldn’t/wouldn’t do.

As with most problems, there are solutions.  However, those that exist seem to be neither simple nor popular.  They include:

Perhaps you have something to add?  Please share your comments with me.  I’d like to help raise awareness about this issue, and see only live pigeons on our sidewalks.