Keeping up with the Green Joneses – Solar and EV Adoption 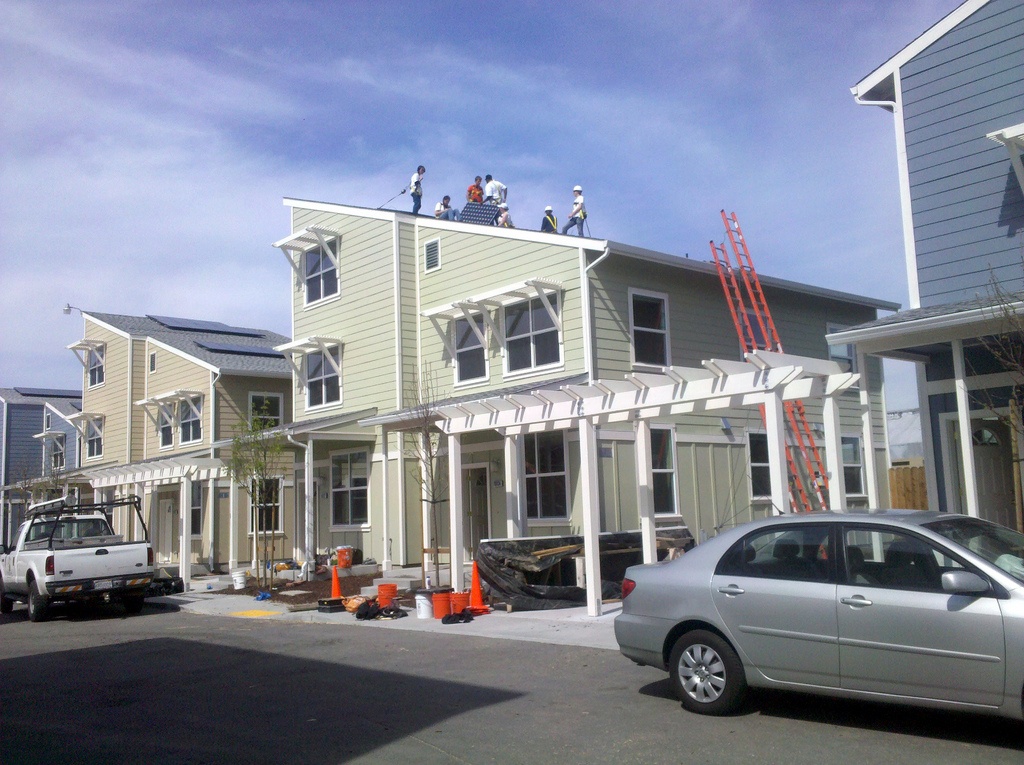 The most recent column on “groundbreaking innovation” Co-Exist from Fast  Company was titled “If Your Neighbor Gets a Solar Panel, You’re Going to Want One Too: Whether  your neighbor has a solar installation is more likely to influence your decision than politics or income level.”

The articles’ author Ben Schiller cites studies which mapped 3,843 solar units installed in Connecticut between 2005 and September 2013. What they found was “‘considerable clustering of adoptions’ in ‘wave-like centrifugal’ patterns. When they looked at the dates of the installs, they found one decision in a neighborhood tended to lead to another.”

Pretty cool, but isn’t this old news? Back in 2005, a study in San Diego compared the influence on energy consumption between potential money savings vs concern for the environment vs peer pressure. The results clearly supported social influence, which reduced consumption by 10 percent.” Influence guru Robert B. Cialdini weighed in on the remarkably effective tactic of adding a smiley face to bills for energy reduction, which further reduced energy use: “People don’t just want to conserve energy, they want to be acknowledged for conserving energy.”

Electric Vehicle (EV) adoption also spread in clusters. Not surprisingly, EV and hybrid purchases have been most concentrated in affluent communities with early-adopter characteristics. But far more interesting and perhaps even more relevant, 50.5%  of all registrations are clustered in just three suburbs, Atherton and Los Altos (in Silicon Valley), and Santa Monica in Southern California. California has created an infrastructure for EV/Hubrids and is first in ownership, but if affluence was the defining attribute, wouldn’t EV/Hybrids be spread evenly across California’s many wealthy communities?

Now that many low- and mid-priced vehicles are offered in hybrid varieties (i.e., Toyota Camry, Honda Civic, and Ford Fusion), green social influence is moving from novelty for the affluent to smart money for the mainstream. It happened before with residential solar:  the highest concentration of Connecticut solar installations clustered in middle income, Republican-voting areas of the state.

Peer influence is also having an impact in the corporate world, where renewable energy  is replacing fossil fuels in industry clusters. Benchmarking in industries and companies – comparing your sustainability performance against your peers - leads to greater adoption of renewable energy.

Peer influence, whether in a corporate or a residential setting, modifies environmental behavior. Can peer shaming work too? Freakonomics economist Steven Levitt, would argue yes. In his words: “…society actually likes it when other people get shamed. … it’s actually a really incredibly efficient mechanism for punishing people who do things we don’t like.”

Another experiment tests peer shaming empirically. San Francisco and Berkeley have both passed legislation requiring that as of March 1, 2015, gas station owners must put climate change warning labels on all gas pump nozzles. The labels say how much carbon dioxide is emitted for every tank of gas burned, saying explicitly how using gas as fuel is contributing to climate change.

Reflecting in The Guardian on a University of Minnesota study that again showed the power of social influence, Adam Corner of the University of Cardiff says, “We may currently compete through demonstrations of conspicuous material consumption, but material goods are simply a marker for social status. It's the social status that's important – and the markers we use to signify it can easily change.”