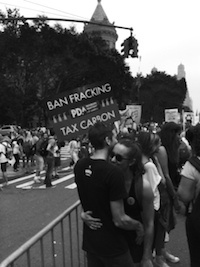 If anyone needed more proof that economics trumps sustainability: low gas prices are causing a plunge in electric vehicle and hybrid sales.

The same phenomenon is happening in the divestment movement. Moral outrage pushed 83 churches, universities and non-profits to divest $50 billion before the September climate march. This is a blip for an industry valued at $5 trillion, whose top investor Blackrock owns $146 billion in fossil fuel investments and where a single company Exxon Mobil is valued at $425 billion, and Shell and Chevron at $268 billion and $248 billion respectively.

These numbers are staggering, and the pace of the divestment movement in relative monetary terms is glacial, despite its many moral and symbolic victories. Even if as Bloomberg’s New Energy Finance says this divestment movement has more rapid growth and quicker scaling than any of its predecessors, does it have a chance of affecting fossil fuel company behavior?

Only when it starts to affect the stock price.

Tim Dickinson argues eloquently in this issue of Rolling Stone that divesting has become the smart move for the financially savvy, and not because of divestment pressure. Prompted by the recent 50% drop in the price of oil, now hovering below $45 per barrel —

“From late June to early January, across the world, the 10 oil firms with the largest proven reserves collectively lost roughly 20 percent of their market value.  …Goldman Sachs warned that nearly $1 trillion in planned oil-field investments would be unprofitable – even if oil were to stabilize at $70 per barrel. The industry is already scaling back the hunt for high-cost sources of new oil. Chevron has shelved drilling in the Canadian Arctic, and Hercules Offshore, a significant driller in the Gulf of Mexico, has idled four rigs and laid off more than 300 workers. Plunging profits are also putting the brakes on fracking.”

And that’s only the beginning. Countries around the world are putting limits on carbon emissions, so much so that Governor of the Bank of England Mark Carney warned that "the vast majority of reserves are unburnable." The argument that fossil fuel companies’ reserves will become “stranded assets” has long been a hopeful prediction from activists, but the message has a different tone when it comes from a powerful central banker whose main concern is not sustainability but stability.

Another concerned guardian of the status quo has similar fears. Bevis Longstreth, who served as commissioner of the SEC under Ronald Reagan and later chaired the Finance Committee of the Rockefeller Brothers Foundation, blasts the oil companies: "There is no good reason for this vast expenditure of stockholder wealth. It is wasted capital, an offense against stockholders in terms financial alone."

But my favorite argument for divesting comes from a report generated by Oxford University’s Stranded Assets Programme. The authors bring up the very real reputational risk that a divestment movement creates, which they label “Organisational Stigma,” or “disapproval, even ‘disgust’ at an organisation’s activities, values or behaviour” and tie it directly to stock price: “Even when divestment outflows are small or short term and do not directly affect future cash flows (as is true with fossil fuel divestment), if they trigger a change in market norms that close off channels of previously available money (i.e., the ability to sell stock), then a downward pressure on the stock price of a targeted firm may be large and permanent.”

Add to that the growing perception that the fossil fuel companies’ decisions about where to invest are considered irrational, and you've created a very serious threat to fossil fuel companies' stock price and the managers whose pay and bonuses depends on that price. And that’s the most likely route to real change.

CSRHub provides access to corporate social responsibility and sustainability ratings and information on 13,000+ companies from 135 industries in 127 countries. By aggregating and normalizing the information from 370 data sources, CSRHub has created a broad, consistent rating system and a searchable database that links millions of rating elements back to their source. Managers, researchers and activists use CSRHub to benchmark company performance, learn how stakeholders evaluate company CSR practices and seek ways to change the world.