Does Trump-Putin Aim Lead to the Arctic?

In an analysis in Vanity Fair titled “In Trump’s Amerika”, Mike Mariani posits that Trump is using the same “chaos theory” techniques to accumulate power that Putin has used successfully for twenty years. From tweets to out-and-out lies, Trump forces the media to focus on fact-checking rather than digging for truth, making honesty and values irrelevant and feeding passivity among the citizenry. Once this quagmire is established, Trump can pursue his aim unfettered.

But what is his ultimate aim? What if we were to follow the money and engage in some wild speculation? What’s the most profitable financial benefit of an alliance between Trump and Putin? Why make Rex Tillerson, an Exxon-lifer with a history of doing deals for Putin’s oil operations in the North Sea and Arctic, Secretary of State? 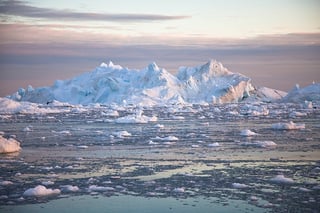 Combine the two leaders’ obsession with personal wealth accumulation with their outsized egos and you might be one of the many pointing to the Arctic.

The Arctic is our “last frontier” with gigantic fossil fuel reserves and motherlodes of minerals. If you wanted to (finally) be the richest man in the world, this wouldn’t be a bad place to start.

What is that worth? The oil and gas is estimated, granted at 2014 prices, to be $17.2 trillion. In addition, the Arctic contains untold deposits of nickel, copper, coal, gold, uranium, tungsten, diamonds, nickel, and iron. And don’t forget the value of a Northern passage that cuts shipping time from Europe to Asia by almost half.

More than $17 trillion to be carved up by the biggest global powers. A wild west for two cowboys to conquer and divvy up. A chance to finally become the richest men in the world.

The arctic has pushed back, thrashing would-be drillers with vicious storms. One example: in 2015, Shell lost $8 billion before it was forced to abandon plans for drilling in the Chukchi Sea.

The best solution, from the Trump-Putin perspective, could be to let climate change do the work. Anything that speeds up climate change melts ice and icebergs, dissolves key impediments to Arctic drilling, and could explain the ubiquity of climate deniers in the Trump cabinet as well as Putin’s assertion that climate change is beneficial for Russia’s economy.

Rex Tillerson plays a critical role in smoothing U.S.-Russia relations. He has worked with Putin for years. His former company, Exxon, is poised to restart drilling whenever the sanctions against Russia are lifted. Both Trump and Putin can act to remove regulatory barriers.

D’Angelo goes on to review potential hurdles to Arctic drilling, including legal challenges and moral outrage. Could Trump and Putin really not care about the future of earth? With everyone in Trump’s administration espousing the view that climate change is a hoax and questioning the scientific proof — if not science itself — we’re watching Trump and Putin apply their chaos technique to drilling in the Arctic.

Last week Trump’s military dropped the Mother Of All Bombs on Afghanistan, supposedly threatening U.S. relations with Russia. My hunch is that those relations aren’t in any danger at all.

I posed my crazy theory to a career investment banker, who seemed to have heard it before. But wouldn’t flooding the market with oil boost supply and depress prices? He replied, “A war in the Middle East should take care of that.”