The California drought caused hydropower production to plummet by 46 percent. The silver lining?  Solar power increased, making up for 83 percent of the hydropower decline. 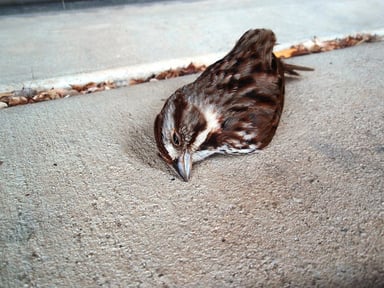 I’m a huge supporter of solar energy, which appears to be an inexhaustible and “free” source of energy. But an article in this week’s New Yorker by National Book Award winner Jonathan Franzen points out that solar panels, when not installed in rooftops but laid out in “horizon-reaching solar farms,” can be just as bad, as can all forms of renewable energy. In Franzen’s words:  “We can dam every river and blight every landscape with biofuel agriculture, solar farms, and wind turbines, to buy some extra years of moderated warming.”

Franzen dissing renewable energy? He is a thought-leader in environmentalism. His 2010 novel Freedom features environmentalist Walter Berglund as protagonist, fighting the immoral forces behind strip mining. In 2011, Franzen was included in The Guardian’s top 20 Green Giants for setting the global environmental agenda. He is also a birder and Audubon Society fan. So it’s disturbing that he spends seven pages of beautifully written prose trying to convince us that we can’t do a thing about climate change and shouldn’t ruin our comfortable lives trying.

Franzen’s article bemoans the Audubon Society’s web site and its new focus on climate change, “the greatest threat” to American birds. Franzen references a writer at the Minneapolis Star Tribune, Jim Williams, who blogged that fighting a local stadium project whose glass walls would kill thousands of birds is insignificant in the context of climate change, which could wipe out nearly half of North American bird species by 2080. Franzen’s counter is chilling: “…can we settle for a shorter life of higher quality, protecting the areas where wild animals and plants are hanging on, at the cost of slightly hastening the human catastrophe? One advantage of the latter approach is that, if a miracle cure like fusion energy should come along, there might still be some intact ecosystems for it to save.”

In other words, save the birds and forget taking action to mitigate climate change because “… it makes no difference to the climate whether any individual, myself included, drives to work or rides a bike. …if I calculate the average annual quota required to limit global warming to two degrees, I find that simply maintaining a typical American single-family home exceeds it in two weeks.”

Instead, Franzen advocates for conservation projects in Peru’s Manu National Park and Coast Rica’s Guanacaste, smaller, local efforts conducted by natives who safeguard biodiversity, while failing to note that the preservation of forests — and in the case of Costa Rica, tree planting as well — also serves to combat climate change and is, in fact, what some believe is the most practical place to start.

I hope there aren’t a lot of smart, talented people like Franzen who think like he does. Especially in California, where Governor Jerry Brown is asking for citizens to combat the drought by voluntarily cut their water consumption by 25%. He’s not asking farmers yet, but counting on citizens to pitch in first. Of course we’ll need a monumental breakthrough on the scale of Franzen’s “cold-fusion” to save ourselves from extinction, but if (or when) that happens, we’ll all have to be living dramatically altered lives with less water and a smaller carbon footprint.

Whether we’re tree-planting conservationists like those Franzen visited in Costa Rica or climate change activists riding bikes to work, we’re all engaged in activism for both at the same time. Our whole way of living has to change, to both honor species and at the same time, reduce our energy consumption. So Mr. Franzen, put your considerable talent to work again and this time, persuade your readers to think of both species conservation and climate change with every action. Changing human behavior has worked in the past and can work now. As for Mr. Franzen? Who’s to say he won’t love riding his bike to work. He’ll certainly be fitter. And possibly happier too.