With all the noise about reducing fossil fuel emissions – articles, boycotts, lawsuits, PR 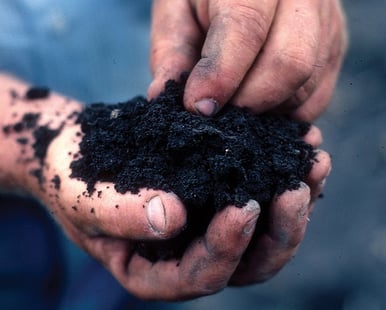 battles, news stories, even TV advertising – weaning ourselves off fossil fuels can sometimes feel like a hopeless struggle. On the other hand, the idea of pulling existing carbon out of the environment still holds a lot of excitement.

The buzz started with trees. From New York mayor Bloomberg’s million trees commitment to Africa’s Green Belt Movement, now 51 million trees strong, even school children know about reforestation. NGOs use public pressure to limit deforestation and encourage tree planting. Investment funds that maintain forests rather than cutting them down pay returns based on carbon credits and grants from agencies such as Forest Carbon Partnership Facility, the Global Environment Fund and the UN-REDD Programme in developing countries.

But forests are only one way nature can help mitigate climate change. Another is healthy soil.

The carbon-capturing quality of healthy soil and the carbon release of degraded soil have been mostly the province of science and professionals – the farmers and ranchers whose livelihood depends on productive soil. What’s holding soil back from getting the same affection as trees? Maybe it’s healthy soil’s distinctly unglamorous origins — decaying organic material, animal dung and yes, human excrement.

Soil is a strategic resource that can absorb enough carbon to offset 5-15% of global fossil fuel emissions. On the other hand, soil stripped of organic material and healthy microbes actually gives off heat-trapping CO2. A 2004 study by R. Lal of Ohio State University showed that depleted soil has contributed 21% of global atmospheric carbon.

With our most promising chance for climate mitigation in carbon sinks, our attitude towards soil has to improve.

The first Summit of the Northwest Biocarbon Initiative (NBI) was subtitled “Restoring Nature - Storing Natural Carbon.” Keynote speaker David Montgomery, MacArthur Genius and author of Dirt: The Erosion of Civilizations argued that only now, seven years after his book was published, is attention to soil becoming a reality. Why? Because the impact of healthy soil on climate change makes the issue topical and personal for our largely urbanized civilization.

The soil buzz has begun in earnest. A recent TED Talk from the African soil restoration guru Allan Savory has gotten 1.7 million views. Savory has been advocating since the 1960s for mixing livestock and crops. Mimicking the way nature developed, with large herds grazing for short periods between which grass can regrow, Savory’s method insures that organic matter can restore soil. Savory’s Holistic Management method has expanded through the organization that bears his name, the Savory Institute.

The momentum for soil builds, even with consumer audiences. NPR did a twenty-minute segment with Judith Schwarz on her book Cows Save the Planet: Soil’s Secrets for Saving the Earth. And conferences like the NBI Summit and the Savory Institute’s first international conference being held this week bring together what have been obdurately distinct silos of environmentalism and agriculture. The Institute is also launching its first 10 U.S. training and education hubs. Savory’s vision is to have 100 hubs operational by 2025, restoring 2.4 billion acres of desertified or dead soil.

Maurice Robinette, owner of Lazy-R Ranch near Spokane and speaker at the NBI Summit, has been practicing and teaching Holistic Management sessions for 15 years. He told me that among the issues Savory’s organization is considering is how to brand the advantages of holistically managed beef — healthier meat from food with more nutrients, healthier soil, healthier environment — with end consumers.

There’s also a conversation about using treated human waste, or the more palatable “biosolids,” as an earth-cooling and soil-healing replacement for chemical fertilizer from companies like Monsanto.

Using treated waste as natural fertilizer is not a new idea. For 20 years, King County, Washington has been supplying biosolids to farmers in Eastern Washington. But just last year, at the instigation of Jesse Israel of the County’s Resource Recovery Section, a new branding effort was launched under the name Loop to expand awareness of biosolids as part of nature’s cycle.

The Loop brand features an infinity symbol and the tagline, “Turn Your Dirt Around.” A consumer compost product called GroCo carries the logo to indicate the local biosolid ingredient. According to Peggy Leonard, Biosolids Program Manager, “Soil is underappreciated and biosolids are even more underappreciated than soil. It’s exciting to see people get excited about the power of soil, and even more so when they see that organic amendments are right under their noses.”