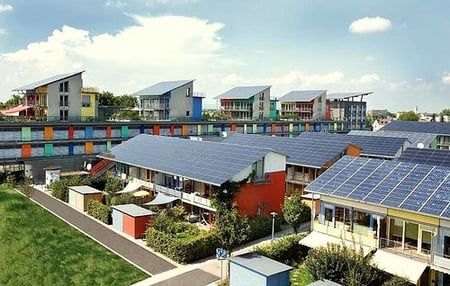 boosting solar, a savvy investor and CEO told me why she doesn’t like solar: two years ago, at an intimate meeting she attended with him in New York, Bill Gates commented that residential solar panels set roofs on fire.

Gates’ comment seemed unnecessary and extreme, especially in that environment. It's not that Gates does not support solar energy at all. Cynthia Figge, co-founder of CSRHub, summarized his comments at the Wall Street Journal ECO:nomics conference earlier this year: "We have a chance of reaching 50% renewable energy use in the 2060 time frame, but it will take at least one of five miracles to come true, and about 200 crazy people working really hard at all five."

His tentative support for solar in general is simply absent for residential solar.

It’s a new industry short on installers, which led to a rush on training. Many installers weren’t even licensed electricians, leading to shoddy construction. The density of the panels and the flammable polymers inside make fires hard to extinguish. Difficulty in shutting them down has given electrical shocks to at least 50 firefighters.

So it was with great relief that I read today’s New York Times Magazine article “The Secret to Solar Power.” Safety hazards and a $50,000 installation cost in 2010 slowed solar installations, but outright purchase is now secondary to the new model of leasing the panels, i.e., having someone else install and maintain the system.

According to Times author Jeff Himmelman, once the cost of solar panels fell, the business model for solar leasing schemes paid out and the market exploded. Installing solar panels yourself still costs $25,000, an amount that takes years to pay back. Instead, companies are selling “solar services.”

Solar service companies use the utility company model which consumers understand, installing and maintaining their solar equipment as part of a lease arrangement where consumers pay a lower monthly charge for energy, often guaranteed not to change for some period of time. Companies like BP which entered the market to sell solar panels have left the business; dedicated alternatives like SunCity, Sungevity and SunEdison now account for 63% of new solar systems in California.

[csrhubwidget company="SunPower-Corporation" size="650x100" hash="c9c0f7"]
Click “Alternative Energy” in the CSRHub Sustainability Ratings widget above to see all the companies and their ratings in this industry.

My question still remains: why don’t we hear more about residential solar in the media? Himmelman blames two lingering misperceptions: entrenched associations of all things “green” with qualities like impractical, ineffective and expensive, and the Solyndra effect: Americans believe that solar is something we don’t know how to do so we should leave it to the Chinese.

Fortunately, it’s a message that has bypassed big investors like Google, which has invested $374 million in residential solar power.

Reminded me of Gates’ comments to a banking industry audience in the 1990s, where, to strains of reggae music, he declared the Internet to be nothing but a fantasy, a pot of gold at the end of the rainbow.

It’s a good analogy. At the time Gates made his prophecy that the Internet was a pipe dream, the transition was just as huge and to many, as unlikely, as the one that moved intelligence from hardware to software, oddly, the transition that Gates himself made happen. Yet the Internet required a dramatic shift in thinking, one that would change — as Cisco’s promotion puts it, “How we live, work, play, learn” and even love.

The same is happening now with energy, where the notion of a centralized source of energy from a power plant that draws from an oil well or a nuclear facility is giving way to a distributed system where energy is produced wherever its source, sun or wind, can reach.

The problem is, what Gates says has power, and people of influence like my CEO friend tend to believe him. That’s why Sunday’s New York Times article is so important. Himmelman is a smart guy talking to the influencers. With the residential solar industry running at $93 billion in 2011 up from $17 billion in 2007, no-one would call his commentary about the solar industry “cute.” Of course, he can’t resist the activist’s glamour, and recounts in great detail the jungle adventures of Danny Kennedy, former Green Peace activist turned solar entrepreneur. Himmelman’s story ends with Kennedy’s comment that selling solar power is by definition a subversive act, a “march…that will get to its destination.” Long live the revolution!