“I’d like to thank the great citizens of our wonderful state…”  How many times have you heard this greeting?  It implies that good citizens are responsible for building a better community.  The Citizen’s United Supreme Court case added to the view that corporations are “citizens” in certain senses.  So, do “good” corporate citizens contribute also to building “good” states?  Some intriguing research on this topic is now possible thanks to a new corporate social responsibility ratings database from CSRHub.

It is hard to compare corporate and state social performance without making some fairly broad assumptions.  For companies, we can measure how they treat the environment, their communities, and their employees.  We can also assess how well companies are governed by their investors, boards, and management teams.  For states or other communities, we can measure things such as education levels, unemployment levels, divorce rates, or how many crimes are committed.  If we perceive a relationship when we compare these measures, we may not be able to know if companies improved the state it lives in or if the good attitudes of the state have been imbued into the company.  We also know that most large companies operate in multiple states and other countries, around the world.  So, a good company could create positive change in many places other than around its headquarters.

CSRHub has full ratings on 1,453 US companies.  The database also has partial ratings on another 1,880 US companies and organizations.  There are entries for 46 of the 50 states, plus Washington, DC and Puerto Rico.  (There are no fully rated companies from Alaska, West Virginia, or Wyoming and only two for New Mexico.)  If you do a simple average of the overall corporate social responsibility (CSR) scores for the companies in each state, you get an interesting “map” of corporate responsibility behavior, by state. 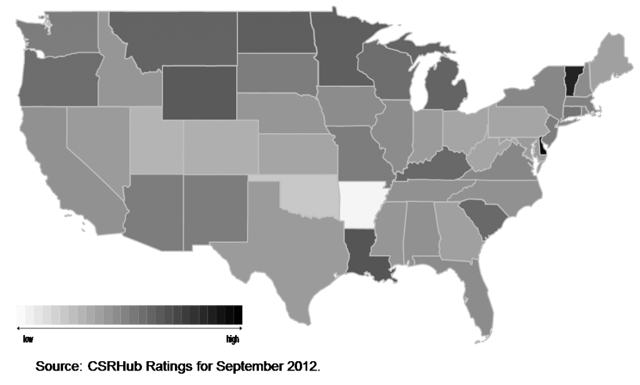 It looks like there is better average social performance for companies located across the top of the country.  There is also a band of good figures down the middle, interrupted only by poor results in Arkansas.  The range in average ratings is fairly large—Vermont comes in at around 55 and Arkansas averages around 43.  (Estimated overall ratings in the CSRHub system are accurate to within 1.8 points at a 95% confidence interval.) 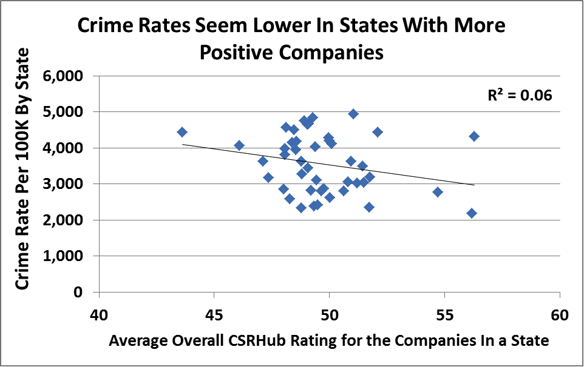 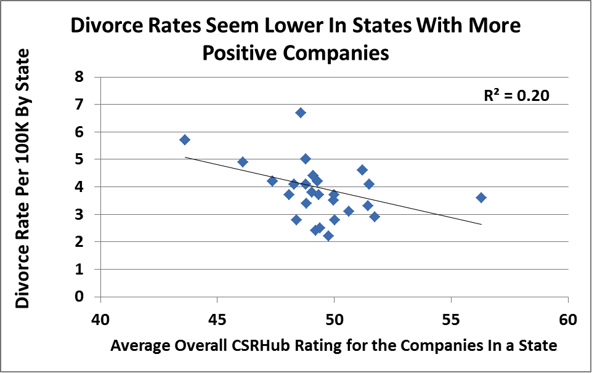 These are only four measures—but all four suggest that positive companies are associated with more livable states.  Most of the correlations are small—suggesting that company behavior contributes only a small amount to changes in these social issues.  But, there certainly seems to be an encouraging connection—one that could start to drive governments to push the companies they supervise and regulate to improve their social performance.

One source of “scatter” in these charts is that the data on some states include “outliers”—companies whose social performance is either much worse or much better than the average for that state.  When we have many companies in the average, these divergences don’t affect the state average that much.  But, when we have only a few companies to consider, a super or subpar performer can shift the numbers.

How could we further refine this analysis?  It would help to include more small companies and organizations, including private companies, educational institutions, and government agencies.  CSRHub is working to increase its coverage of these sectors of the economy and it may soon be able to add this dimension.  Looking at changes over time, would also help.  However, CSRHub’s data goes back only two years, and government data often lags two or three years behind the present.  We will have to wait several more years to do this type of “longitudinal” research.  In the meantime, there seems to be fact-based evidence to change the opening of that speech to:  “I’d like to thank the great citizens and socially positive companies of our wonderful state…”

CSRHub provides access to corporate social responsibility and sustainability ratings and information on nearly 7,000 companies from 135 industries in 82 countries. By aggregating and normalizing the information from 200 data sources, CSRHub has created a broad, consistent rating system and a searchable database that links millions of rating elements back to their source. Managers, researchers and activists use CSRHub to benchmark company performance, learn how stakeholders evaluate company CSR practices and seek ways to change the world.
END_OF_DOCUMENT_TOKEN_TO_BE_REPLACED