Native Americans Have a Voice in Climate Science

ferry transporting ancient tribal artifacts to their new home at the Suquamish Museum. As reported in the Huffington Post, the Suquamish Tribal Chairman Leonard Forsman watched the orcas swarm the ferry as it neared the terminal.

"They were pretty happily splashing around, flipping their tails in the water," Forsman said the next day. "We believe they were welcoming the artifacts home as they made their way back from Seattle, back to the reservation.”

My first reaction was this: just when Native Americans are gaining a toehold in the climate change discussion, gaining two seats on Obama’s 25-member Climate Task Force, they come out with a statement that strains their credibility.

Our national mythology holds that American Indians are caretakers of the land. They’ve driven efforts in Washington State to restore rivers and contest coal ports that threaten the sea life on which their livelihoods depend. They fight for burial grounds and sacred places, neither of which have a place in our scientific belief system. Their sovereign rights to do so are inarguable, and they’re beginning to win.

But when the race is based in Western notions of power and science, Native people generally lose. Think about the credentials tribal members bring to the Climate Task Force. One is Karen Diver, Chairwoman of Fond du Lac Band of Lake Superior Chippewa, a small reservation whose population was 3,728 in 2000; the other is Reggie Joule, mayor of the Northwest Arctic Borough (pop 7,523), a former athlete, contractor and Alaskan state representative whose legislative focus was finance and education.

Contrast these Native American Climate Task Force members with, for example, Jay Inslee, Governor of Washington. As a member of the U.S. Congress, Inslee served on caucuses for oceans, animals and international conservation. In 2007, Inslee wrote a book that Publisher’s Weekly called an “energetic articulation of a clean-energy future.” In his campaign and as governor, Inslee embraced environmental leadership, most recently signing the agreement for a Pacific Coast Action Plan on Climate and Energy.

And yet Obama believes Diver and Joule will be valuable contributors. Why?

Eighteen months ago, the Northwest American Indians organized a conference in Washington D.C. for tribal leaders from across the country, in part to bridge the gap between climate change scientists and Native Americans. While tribal members shared an abundance of anecdotes about changes in natural patterns – for the first time last year, pelicans were observed in the Pacific Northwest – they also reported quantitative measurements. As the University of Washington oceanographer Jan Newton told the Seattle Times, "(American Indians) were on the ground making some of the measurements the university scientists couldn't get out to do."

Common sense demands that governments bring tribes to the table as full participants in a discussion of how to deal with the challenges that climate change presents and that they treat indigenous viewpoints not as quaint supplements to Western science but as equally valid explanations of how the world works—that such observations, taken as they are over millennia, are a science in their own right.

The Climactic Change issue begins with an abstract from the Native American writers that states the fundamental premise of climate change collaboration:

Despite a keen awareness of climate change, northern Indigenous Peoples have had limited participation in climate-change science due to limited access, power imbalances, and differences in worldview. A western science emphasis on facts and an indigenous emphasis on relationships to spiritual and biophysical components indicate important but distinct contributions that each knowledge system can make.

If it’s not enough that a scientific journal article puts the “indigenous emphasis on relationships to spiritual components” on the same level as scientific fact, take a look at Obama’s November 1st executive order, “Preparing the United States for the Effects of Climate Change.” For the first time, tribes are specifically mentioned, including a reference to their service on the Council on Climate Preparedness and Resilience. Obama repeatedly refers to “partnership with State, local, and tribal governments.”

And then there’s last week’s story of the whale escort delivering Indian artifacts. If the Indians’ spiritual, relationship-based approach to climate change is a knowledge system equal to Western science, who am I to question their friendships with whales?

END_OF_DOCUMENT_TOKEN_TO_BE_REPLACED

Apartheid a Model for Climate Change?

How many of us remember the “Crying Indian” from the early 70s? In that public service ad, a Native American (played by an Italian-American actor) canoes down a gorgeous stream, encountering floating trash, smokestacks and a beach littered with refuse. As he passes a crowded highway, a passenger throws garbage out the window. The camera pans to his face, where one tear makes its way down his craggy cheek.

That unforgettable image marked the start of the mass ecology movement and became a symbol almost as powerful as Earth Day. It also reinforced Native Americans as powerless victims of our culture’s wanton appetites. 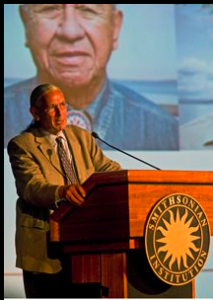 into their own hands. Four tribes from the Olympic Peninsula in Washington State hosted a symposium in Washington D.C. at the Smithsonian's National Museum of the American Indian to address climate change.

Called “First Stewards: Coastal Peoples Address Climate Change,” this gathering of coastal tribes from all regions in the US and its Pacific Island territories engaged sponsors from US land management services within the US Department of the Interior and partners from environmental organizations such as The Nature Conservancy.

As I read the daily blog from the symposium, I was struck by the heartbreaking stories of tribes whose livelihoods are built on the rapidly disappearing bounty of nature. These embattled peoples are once again suffering the brunt of our collective rapacity, this time in territory degradation and species loss.

But this time, Native Americans insist on being part of the solution. And some elements within our government agree. Daniel J. Basta, director, NOAA’s Office of National Marine Sanctuaries, says, “Coastal indigenous people have internalized thousands of years of rich, place-based knowledge of climate change and its impact on humans, and adaptive behavior. Their experience is extremely valuable today and can help all of us as the world looks for ways to adapt.”

We need knowledgeable people to offer ideas for adaptation. But we also need passionate leaders to lead the fight for a long-term solution. Native Americans have rarely been successful at holding off those with great power from doing exactly what they want. But Natives are angry. Ann Marie Chischilly, an environmental professional and Navaho tribe member, urges fellow Natives, “Get mad! Get motivated and get involved.” And what better symbol in the fight to stem climate change than America’s first inhabitants?

But any good fight requires an antagonist, the more ruthless the better. And who could we blame that could make any real difference? The car companies have already embraced higher mileage requirements and electric cars. Who else is there?

In his cover story for Rolling Stone, “Global Warming's Terrifying New Math,” Bill McKibben suggests a candidate for villain, the oil companies. His “terrifying new math” estimates the value of fossil fuel reserves held by the fossil fuel industry at tens of trillions of dollars. Hence the seemingly endless resources the oil industry spends to stop any attempt to regulate its businesses.

And if we burn all of those reserves as the oil companies and their investors hope? CO2 levels will rise way past the level at which the human race can survive.

Indeed, this all-powerful adversary can only be stopped through a planet-wide moral outrage not seen since the anti-Apartheid movement. McKibben quotes Bob Massie, a former anti-apartheid activist who helped found the Investor Network on Climate Risk:

"Given the severity of the climate crisis, a comparable demand that our institutions dump stock from companies that are destroying the planet would not only be appropriate but effective. The message is simple: We have had enough. We must sever the ties with those who profit from climate change – now."

The successful battle to end Apartheid had its clear villains, Apartheid supporters, its effective change agents in the international investment community, and its victims and symbols, the “non-whites.” We have our bad guys, a group already resented for spills like the Exxon Valdez and the BP Gulf Oil Spill.

Click "Oil and Gas Extraction" in the CSRHub Sustainability Ratings widget above to see all the companies and their ratings in this industry.

McKibben suggests a divestment strategy kicked off by students outraged either by the threats to their own future or by the same empathy that drove their reaction to Apartheid.

While Natives have not had a lot of success going up against the powerful, they are effective and deeply moving as symbols as was seen with the Crying Indian. Only this time, they’ll be lending their own images in support of their own cause. And images of suffering Natives will be angry instead of sad. And they won’t be actors.