Panera As a Paradigm? 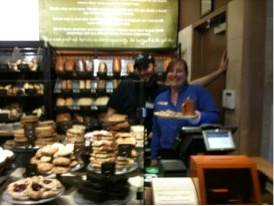 Panera Bread has a number of coffee shops where I live, in New York City.  I used to go to them fairly often before I became involved in CSRHub.  However, my visits became less frequent after I learned more about Slow Food from my friend Brian Kaminer and after I saw the ratings we reported for Panera on the CSRHub site.

As you can see, Panera gets poor ratings on its environment performance and weak community ratings.  (Nine of our 201 sources track Panera.)  Nothing horrible—but nothing that would sway “conscious consumers” to go an extra block or two for a cup of coffee and a nice roll.

Then, I had to go to Boston for some meetings.  I was 45 minutes early for one near Government Center and a Panera shop was temptingly nearby (around the corner on Tremont).  I needed a cup of coffee—and a few minutes of wi-fi access so I could catch up on my email.  I walked in and headed towards the counter.

I was immediately approached by a pleasant young woman who asked me if I was familiar with her shop.  I told her I thought I was, but she persisted.  Had I been to this Panera outlet, before?  When I answered “no,” she launched into a rather lengthy description.

As I understand it, Panera has started opening a new format operation called “Panera Cares.”  Instead of having fixed prices, customers are told what Panera thinks is a “fair price.”  Customers can then pay whatever they feel is fair or that they are able to pay.  The payments go into a box (the cashiers can make change but don’t take the money).  If you pay something extra, it goes to feed local homeless people.  The staff there seemed to love the concept.

If you can’t pay anything, the store will still feed you.  If you can’t pay and you wish to do it, you can volunteer to work at the store for an hour or two.  Later in my visit, I listened to the same pleasant greeter arrange work time slots for two young men who looked pretty hungry.  They were asked to wear clean clothes “with as few tears and rips as possible.”  Almost every time slot was filled for the next three days.  One of the young men seemed to be experienced in the routine and was encouraging his friend to join this new system.  “You can eat a lot,” he said.  “They make good food and you’ll love doing the work.”

I was told that Panera has opened five Panera Care shops since May 2010.  A second manager told me with obvious pride, that Panera’s founder and co-CEO Ron Shaich wanted to give back to his community and was dedicated to making this concept work.  I have to admit, I was pretty impressed!  This is a radical idea—a system that is blatantly socialistic .  And, it is coming from a company that hadn’t distinguished itself in this area (at least as far as I could tell), in the past.

Is this a new paradigm?  How many stores will post something like this in their window: "Panera Cares.  We are a non-profit community cafe of shared responsibility.  We trust you to do the right thing."  Will McDonalds, Starbucks, and Dunkin Donuts all follow in Panera’s footsteps?  What effect would it have on our society, if they did?

Unless I’ve missed something (and even though I am pretty skeptical, I don’t think this effort is just “greenwashing”), I would hope to see an outpouring of support and enthusiasm for Panera from the CSR and Slow Food community.  Let’s prove that people will pay a fair amount for the goods they want—plus a little more, if they know that doing so will help their community.