First: “Nothing Released …. No Smoke …. No Incident” 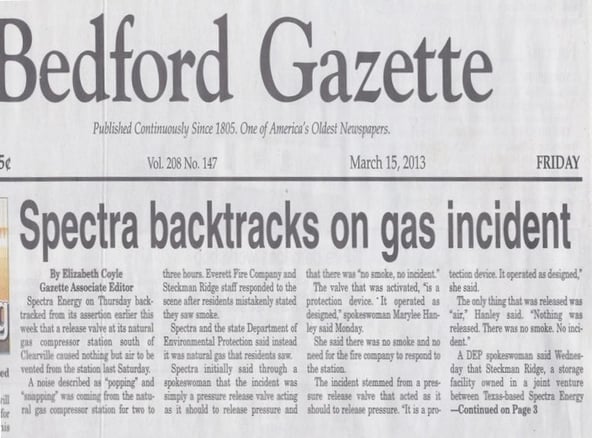 From Spectra Energy Board of Directors 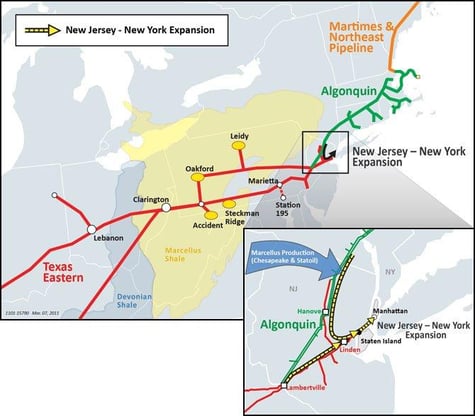 it made about a nighttime incident at its huge natural gas compressor station in Bedford County, PA, after persistent neighbors and a reporter kept pressing the company and state regulators for facts.1

On the evening of March 9, neighbors heard snapping and popping sounds like fire crackers coming from the facility; then they saw what looked like smoke coming from the compressor station.  They called 911 and fire trucks from the nearby town of Everett rolled to the scene.  The noise lasted 2-3 hours, according to neighbors.

Spectra Energy's initial response was autocratic and dismissive:  "Nothing was released. There was no smoke. No incident."  This was from Marylee Hanley, a "Director of Stakeholder Outreach" located nearly 500 miles away in the greater Boston area.

Then the story began to change, thanks to the persistence of nearby Property Owner Angel Smith and Associate Editor Elizabeth Coyle, of the Bedford Gazette.

They kept the pressure on Spectra Energy and the Pennsylvania Department of Environmental Protection (DEP).  With its initial “no incident” response crumbling, the company apparently substituted a different Director of Stakeholder Outreach from its Houston headquarters.

This one, Andrea Grover, admitted what the Pennsylvania DEP had already acknowledged:  There was a release of methane and other hydrocarbons; but so far the company refuses to say how much.

But as reported in the Bedford Gazette, Spectra Energy is legally permitted to emit literally tons of pollutants per year from this single facility.  For example:  50 tons annually of volatile organic compounds; 25 tons of hazardous air pollutants, according to the DEP.

Timing is everything in life.  As it turns out, a large socially responsible investor group, Trillium Asset Management, with over $1 BILLION in assets under management, has filed a shareholder resolution requesting a report from Spectra Energy's Board of Directors on its fugitive methane emissions.  Reference link: https://www.ceres.org/incr/engagement/corporate-dialogues/shareholder-resolutions/spectra-energy-fugitive-methane-emissions-2013

Trillium Asset Management said: "We believe Spectra Energy's social license to operate is at risk and the company has a responsibility to implement a program of measurement, mitigation, and disclosure."

If that weren’t enough evidence of ongoing problems with Spectra Energy operations – as recently as December, the Pipeline Hazardous Materials Safety Administration (PHMSA), issued Spectra Energy CEO Greg Ebel a "Final Order" and civil penalty of $134,500 related to various violations across several states.  Included in this Order, the company was cited for failure regarding valve inspections.
[csrhubwidget company="Spectra-Energy-Partners-LP" size="650x100" hash="c9c0f7"]

In fact, PHMSA said the company failed to follow its own Standard Operating Procedure (SOP) 5-5010, Valve Inspection and Maintenance, which requires annual valve inspections, but at least at intervals not exceeding 15 months, “for valves that might be required during an emergency.”

The Notice alleged that between 2008 and 2011, multiple valves at Spectra Energy’s pipeline division (Texas Eastern) facilities in Texas, Louisiana, and Arkansas had not been partially operated as part of the annual inspections.

The PHMSA document notes (emphasis added): “Respondent [i.e., Spectra Energy], however, conceded that at the time of the inspection SOP 5-5010 required inspection and partial operation of all valves, both emergency and non-emergency, and that it had not complied with this procedure.  An operator that fails to follow its own procedures for valve inspections increases the risk of preventable pipeline accidents.”   Reference Link (see pages 3-4 of PHMSA’s Final Order): http://www.phmsa.dot.gov/staticfiles/PHMSA/DownloadableFiles/420121009_Final%20Order_12212012.pdf

Regarding valve problems and methane emissions at its Steckman Ridge facility, Spectra Energy initially maintained that there was a normally operating valve release of “air,” according to the Bedford Gazette’s account.

Then the company admitted (emphasis added), a “small pressure relief valve was activated when the valve detected a higher than normal pressure in that section of the station.”  As a result, a “small volume of natural gas” was released, according to the report in the Bedford Gazette.

Since the company is committed to the word “small,” why not answer the question about how much and exactly what was released?  But this incident and Spectra Energy’s defensive behavior raises more questions.

Was There An Unexpected Event?

For example, while events were unfolding at the Steckman Ridge compressor station, I contacted a source familiar with such gas operations.  Based on the eyewitness accounts, this source stated (emphasis added):

“The first thing I thought of was a relief valve opening and closing because they open and close with tremendous pressure applied to the valve and the instantaneous starting and stopping of flow through the valve is noisy, given the high pressure.

This is yet another question that Spectra Energy has, so far, declined to answer.  Will the Pennsylvania DEP pursue this question with the company?

As Spectra Energy began to backtrack from its initial denial, the source noted, “It doesn't surprise me that they tried to pull a fast one because they think nobody understands their business but them.  Just arrogance.”

Michelle Beegle, who lives one-half mile from the compressor station is quoted in the Bedford Gazette as saying:  “’It just goes to show you how they are lying’ she said.  ‘I don’t believe a word they say, the company or DEP.’”

For those who look for fact-based answers, Spectra Energy has a long, documented record of problems.  It includes violations, explosions and fines (including a 15 million dollar federal fine).  Refer to Footnote #2 under Links & Resources for an easy-to-use guide to the company’s track record.2

Further, Spectra Energy’s history at its Steckman Ridge facility includes an on-the-record statement filed by Spectra Energy with the Federal Energy Regulatory Commission (FERC).  In its own document, Spectra Energy uses Webster’s dictionary definition of “lying” to support the company’s assertion that, “There is no evidence of willful ‘lying’ by any Project Representative to landowners.”   See Footnote #3 under Links & Resources for context and a downloadable pdf file of Spectra Energy’s document that it submitted to FERC.3

Spectra Energy has had operational problems from the beginning at its Steckman Ridge facility.  It is time for answers – not corporate platitudes about “Stakeholder Outreach.”

2 Spectra Energy’s Track Record is available from public sources.  Following are highlights with links that include additional sources and documents:

2) PCB Contamination (PolyChlorinated Biphenyls) – Spectra Energy acknowledges in its Form 10-K (filed with the Securities and Exchange Commission on Feb. 27, 2012) that highly toxic PCBs remain in its pipeline system (emphasis added):  "The Toxic Substances Control Act, which requires that polychlorinated biphenyl (PCB) contaminated materials be managed in accordance with a comprehensive regulatory regime. Because of the historical use of lubricating oils containing PCBs, the internal surfaces of some of our pipeline systems are contaminated with PCBs, and liquids and other materials removed from these pipelines must be managed in compliance with such regulations."  See p. 23 (5th bullet) of Spectra Energy's 10-K filing, under the subhead, "Environmental Matters." Pdf file:  SpectraEnergyCorp10K2011   Spectra Energy Watch – Spectra PCBs 2: http://www.spectraenergywatch.com/blog/?p=498 Spectra Energy Watch – Spectra PCBs?: http://www.spectraenergywatch.com/blog/?p=480

3 Understanding the Corporate Culture in its own words:  Definition of lying as a defense – Spectra Energy filed a 32-page report with the Federal Energy Regulatory Commission (FERC) exonerating itself regarding complaints about abusive and unethical behavior toward landowners as part of its 12 billion-cubic-feet underground gas storage reservoir in Clearville, PA, known as Steckman Ridge.

The original report is accessible on my website and it is titled, “Inquiry Report — Response to Benard Allegations.”  In its official report, Spectra Energy uses the dictionary definition of lying as a proof point to claim:  “There is no evidence of willful ‘lying’ by any Project Representative to landowners.” This technique illustrates the slippery slope gas companies like Spectra Energy navigate between their words and their deeds.  Spectra Energy’s report and the first of four commentaries are available at this link, “Pious Mouse Wash 1: http://www.spectraenergywatch.com/blog/?p=213

Mike Benard was Director of Communications and Public Affairs and Vice President at Kodak for more than a dozen years. He publishes Spectra Energy Watch,  a blog dealing with the energy industry,  from property rights to natural gas industry issues related to hydraulic fracturing of shale gas fields. Mikes a graduate of John Carroll University, and holds a BA in English and a M.Ed. from Temple University.