Will “Resilience” Be Our Saving Grace?

Last week, the wine-making town of Sebastopol became the second California city after 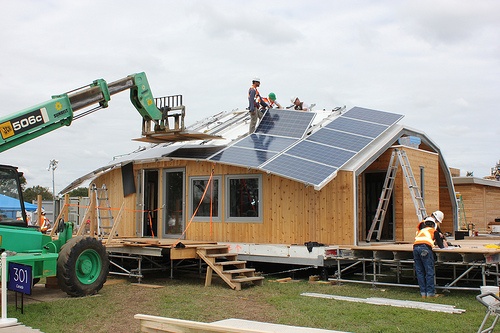 Lancaster to require that solar panels be installed in all new building construction.

Among the driving forces for Sebastopol’s solar are local realtors, who are going door to door, selling the program as a safeguard against power loss and rising prices. Sustainability is still a strong motivation for some in this liberal-leaning town, but it is resilience that’s motivating support from local business people.

The anti-solar forces supported by Heritage Foundation and Fox News’ claim that California will face more rolling black-outs from the state’s increasing reliance on renewable energy. But watching the two sides duke it out on Fox Business, it looks to this viewer like Fox’s tactic could backfire in the face of the very real resilience of renewable power.

I’ll bet you’ll hear more about “resilience.” In the past, the “sustainability” movement has struggled with language. “Global warming.” “Climate change.” “Rising Sea Levels.” And perhaps the most problematic, “Sustainability” itself.

An apt analogy can be found on the Internet.  In 1992, when I first started working with Cisco on language around its new field “Internetworking,” company officials were firm about building a business category around a term that underscored their technical elitism. Back then, Internetworking accurately described what was as obscure as rocket science. Cisco engineers literally scoffed at those who couldn’t understand their equipment’s technology.

Language was holding back the Information Superhighway even as the world was pushing them to build it.

When Cisco realized the market limitations that the whole “Internetworking” approach was putting on the company’s growth, they finally accepted their place as part of a “networking.”

Like “Internetworking,” “Sustainability” is cumbersome and hard to understand. It doesn’t speak to a problem real people have. It’s for the insiders.

So what is the environmental movement’s equivalent of “networking?” Is “resilience” the word that can expand “sustainability” beyond the movement’s core?

Kevin Dingle, President of Sustaining Structures, says that the buzz in corporate real estate is all around “resilience.” Business is booming. Legislation like energy benchmarking helps, as does the promise of lower energy bills. LEED construction and Energy Star for Buildings  are considered good for Corporate Social Responsibility, in other words, for traditional sustainability reasons.

But the key differentiator for renewable energy in buildings has moved on from Sustainability. Now the hot pitch is resilience.

Dingle credits Superstorm Sandy and other natural disasters for this shift. Power was out in downtown Manhattan for a full week in some places while a central station dried out and came back on line. Solar can provide an effective, on-site power back-up, or resiliency, that commercial and residential customers want.

In April, the American Solar Energy Society conference in Baltimore featured the idea of resiliency in their plenary panel “Climate and Resiliency.” The conference’s lead press release emphasized the same idea, “Renewable energy provides resiliency for communities in the face of climate-related weather disasters.”

The U.S. Department of Energy has initiated a program to improve electric grid reliability and resiliency in part through wind and solar.

Language creates our reality. Sustainability has been driving the environmental world for some years. Maybe I’m alone in this, but when I hear the word, my automatic reaction is “How long can we sustain this?” It brings to mind the phrase “Dark Optimism” coined by a UK environmental radical Shaun Chamberlin to describe the force he wants to corral to protest for climate change.

In stark contrast, the word resiliency is filled with light and hope, signifying a rebounding or springing back. Just when so many are so despondent about the environment, new language arrives to save us. It reminds us of the dawn of the Internet, when words like “internetworking” were slowing acceptance of what was to become a life-changing transformation.

CSRHub provides access to corporate social responsibility and sustainability ratings and information on 7,300+ companies from 135 industries in 91 countries. By aggregating and normalizing the information from 200 data sources, CSRHub has created a broad, consistent rating system and a searchable database that links millions of rating elements back to their source. Managers, researchers and activists use CSRHub to benchmark company performance, learn how stakeholders evaluate company CSR practices and seek ways to change the world.