Light at the End of the Trans-Alaska Pipeline 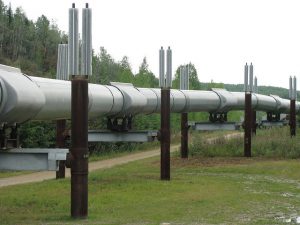 Writing recently for the Wall Street Journal, Thomas Barrett, President of Alyeska which owns and manages the Trans-Alaska Pipeline, bemoans the pipeline’s deterioration due to falling oil production and urges that oil drilling sites be opened in Alaskan seas to increase the oil load and save the pipeline.

But first, Barrett celebrates this amazing scientific and engineering feat. Completed in 1977 for over $8 billion, the Trans-Alaska Pipeline runs for 800 miles, carrying oil from its source in the North Slope to the port of Valdez. The complexity is mind-boggling: hot oil, maintained at a steady 140 degrees
through external temperatures as low as 60 degrees below zero, is pushed along by eleven pumping stations through pipe wrapped in 4 inches of fiberglass insulation, about half of it buried and half carried above the tundra on 78,000 support structures. The tundra’s temperature is further stabilized through 124,000 heat releasing pipes.

All this while balancing the demands of the pipeline’s powerful owners, primarily BP and Exxon Mobil.

For years, pipeline managers have claimed the pipeline needs more oil. After peaking in 1988 at over 2 million barrels/day, oil production in the North Slope declined, resulting in lower throughput, which leads to cooling oil, which over time results in build-up of sludge and other substances harmful to the pipeline. Barrett’s recommendation is to increase output by opening new oil drilling sites in the Chuchki and Beaufort seas and Cook Inlet near Valdez.

So far, the Interior Department has refused to sell these off-shore oil Alaskan leases, yet conservative forces and Alyeska managers continue to push.

According to Barrett, the only other option is to shut down the pipeline. The pipeline currently carries just a fourth of its maximum capacity, and its load will continue to decline, reducing revenue while requiring costly repairs. And it’s not just repairs caused by low oil flow. Pipeline President Barrett is still catching up on maintenance long-delayed by former Presidents, all but one drawn from member companies whose primary interest was to minimize costs and giving Alyeska poor ratings for environmental performance by ratings company CSRHub.

In addition, the pipeline is now almost forty years old. Insulation is eroding. Pipe seals are breaking. It seems it might be time to retire it anyway.

Climate activist Bill McKibben would agree. In an article in this month’s New Republic, McKibben argues for a “far more stringent effort” to control climate change than the plans agreed to after last year’s Paris Climate Summit. McKibben points to a state-by-state plan developed by American scientists led by Mark Z. Jacobson at Stanford to transition rapidly to renewable energy from sun, wind and water, at the rate of 80-85% by 2030 and 100% by 2050. In Alaska, that would mean shifting to onshore and offshore wind for 70% of energy requirements and another 20% from hydroelectric.

The pipeline solution seems simple, doesn’t it? Instead of investing in oil pipeline maintenance, allow the North Slope oil to run out and the pipeline to degrade, then shut it down, however much it hurts to abandon that miracle of American know how. Invest instead in wind turbines.

One expensive problem remains. When the pipeline was originally built, the agreement reached with native tribes and environmentalists required that upon shutdown, all hazardous pipe, pumps, support structures, etc. must be removed and the land and vegetation restored along the pipeline as well the roads built to assemble it. The cost of disassembly could exceed the pipeline’s original cost.

What incentive does Alyeska have to make good on its promise? Oil and gas is a major source of tax revenue for Alaska and enforcement is notoriously lax. And how would you establish fines for leaving toxic pipe to erode along a 420 mile swath of tundra whose land value is virtually nil but, without which, an entire society’s source of subsistence is destroyed? Where one-third of the world’s soil-bound carbon is stored, then released whenever permafrost melts, adding to climate change?

In the past, regulators have succeeded in extracting even larger clean-up costs from the oil companies. But public outrage has played a huge part, and it may be harder to rouse activists on behalf of an old pipeline and the tundra below. If Alyeska’s owners cannot be pushed into living up to their agreement to dissemble the pipeline, then the task will fall to some combination of state and Federal agencies, and, eventually, American taxpayers. The biggest question is not how, but when.