In 2008 CSRHub began measuring performance in corporate social responsibility (CSR). Using ten years of history, we are now starting to answer questions such as:

CSRHub’s ratings incorporate the input of virtually every major source of opinion about how companies treat environment, social, and governance (ESG) issues.  Our patented methodology weights and combines these opinions in a way that makes them comparable both between companies and over time.

The chart below on Average CSRHub Ratings shows that since 2008, average ratings increased by almost 9 points to a peak in 2016. They fell somewhat over the last two years, but have still ended up by 6 points over ten years. Even from 2008 to 2010, through the worst of the Great Recession, ratings rose. The year-to-year changes are modest and gradual over time, suggesting there have been fundamental changes in business strategy for these companies during this period. 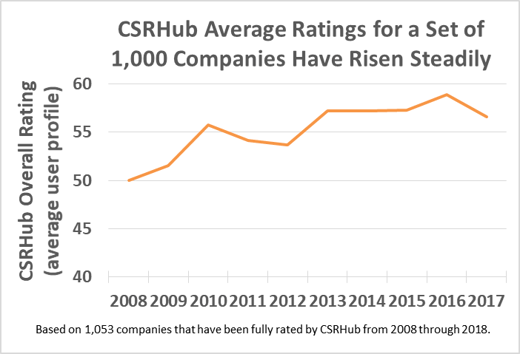 We only provided sustainability ratings for around 2,000 companies in 2008—we could only find about 50 ESG data sources at that time.  By now, we have gathered data on more than 140,000 companies from 550 sources—and offer ratings on more than 18,000.  The growth in our ratings universe appears to have diminished the overall increase in ratings. 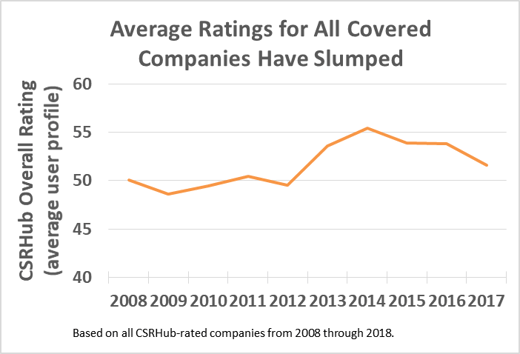 Our overall ratings are based on twelve subcategory ratings that in turn feed four different category scores.  We’d written previously about the fact that the emphasis between our four category scores seemed to shift over time.

These shifts appear to be continuing. Governance rose sharply during the 2008-10—probably as a response to the 2008 financial crisis.  Environment ratings surged in between 2012 and 2016, as companies responded to pressure on climate change and water issues.  Employee issues have remained the most highly rated area since 2010 while Community ratings started as the lowest in 2008 and have stayed near the bottom.  The idea that companies are more concerned about their employees than the community they live in is something we believe other ratings groups have not yet noticed. 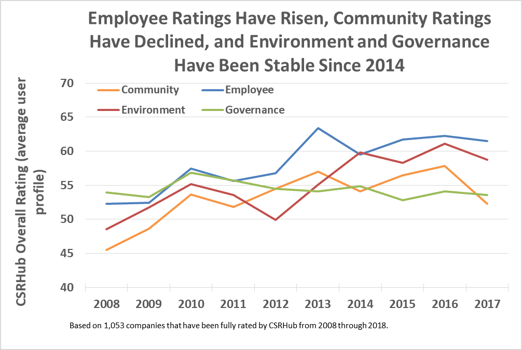 Look for part 2 in our series tomorrow, as we continue to explore CSR trends.

Bahar Gidwani has built and run large technology-based businesses for many years. Bahar holds a CFA (Chartered Financial Analyst) and was one of the first people to receive the FSA (Fundamentals of Sustainability Accounting) designation from SASB. Bahar worked on Wall Street with Kidder, Peabody, and with McKinsey & Co. He has founded several technology-based companies and is a co-founder of CSRHub, the world’s broadest source of corporate social responsibility information. He has an MBA from Harvard Business School and an undergraduate degree in physics and astronomy. He plays bridge, races sailboats, and is based in New York City