We have previously defined “Big Data” and shown how we feel it could help address some problems that exist in collecting corporate social responsibility (CSR) and sustainability data on companies.  We have also further described the problems with the currently dominant method of gathering this data—an analyst-based method.

CSRHub uses input from investor-driven sources (known as “ESG” for Environment, Social, and Governance or “SRI” for Socially Responsible Investment), non-governmental organizations, government organizations, and “crowd sources” to construct a 360 degree view of a company’s sustainability performance.  To better understand this process, let’s consider an example.

Hewlett Packard is a heavily tracked company.  We have 56 sources of data for this company that together contribute 494 different rating elements.  We map each of these elements into one of twelve different CSR subcategories.  For instance, here are mappings for 20 of the elements that contribute to the Hewlett Packard rating:

Some of these data elements could map to more than one subcategory.  For instance, a company that is on the list of “Best Workplaces for Commuters” would get credit both for its energy saving effort (in “Energy & Climate Change”) for the benefit its programs bring to its employees (in “Compensation & Benefits).

Each value from each data element is converted into a zero to 100 rating (zero = lowest, 100 = highest).  These scores are then adjusted by comparing them to each other.  In the example above, there are 11 sources for HP’s board performance.  Suppose three of them gave it a great rating, six a medium rating, and two a poor one.  Computer analytics would guess that the six scores that agree are correct and that HP’s board rating is in the medium range.  The assumption is that three sources tended to be biased towards high scores and two towards low scores.  This chart shows the actual distribution of scores at the subcategory level, along with a calculation of the “normal” error curve that results.

When the analysis is repeated across thousands of companies, a picture emerges as to which sources tend to be overly positive or negative and which tend to predict the “mean” of the other sources.  All sources can be adjusted, based on this feedback—moving them up or down so they more accurately match the opinion of all other sources.  After a large number of iterations in this process, there is a consensus score for each subcategory for each company analyzed. 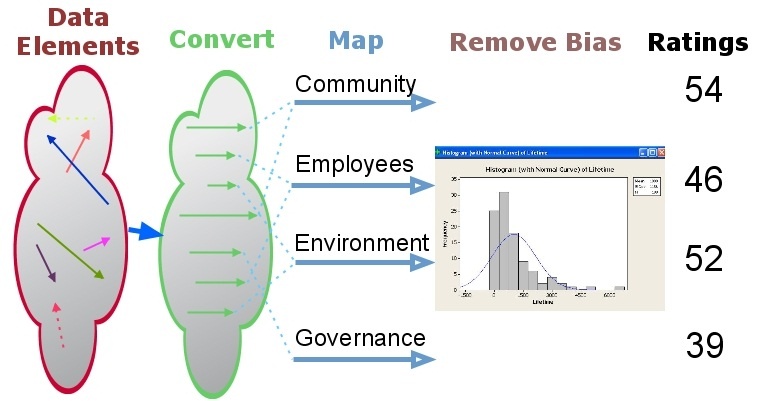 By making a few assumptions about how the errors in data are distributed, one can assess the accuracy of ratings.  In a previous post, we showed that CSRHub’s overall rating accurately represents the values that underlie it to within 1.8 points at a 95% confidence interval.

CSRHub provides access to corporate social responsibility and sustainability ratings and information on nearly 5,000 companies from 135 industries in 65 countries. By aggregating and normalizing the information from over 170 data sources, CSRHub has created a broad, consistent rating system and a searchable database that links millions of rating elements back to their source. Managers, researchers and activists use CSRHub to benchmark company performance, learn how stakeholders evaluate company CSR practices and seek ways to change the world.