During the Christmas and New Year “holiday weeks,” I try to catch up on my reading (and clean out my email inbox!).  I thought I’d share three things I’ve recently read that I felt others who are interested in Corporate Social Responsibility (CSR) might enjoy. 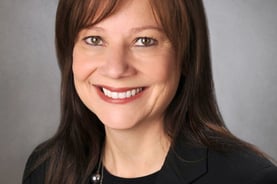 The first was a nice summary from Business Week on General Motor’s new CEO, Mary Barra: http://www.businessweek.com/articles/2013-12-12/exclusive-the-inside-story-of-gms-comeback-and-mary-barras-rise .  Add this to Marissa Mayer taking the helm at Yahoo! and we can claim solid progress in 2013 towards bringing more women into the C-suite.

The second was a book called “Nudge” by Richard Thaler and Cass Sunstein.  I’ve always felt that any process or system can be improved via constant examination and refinement.  This has resulted in comments by those who work with me that I am a “nudge”—a good Yiddish term for someone who “persistently pesters, annoys, or complains.”  (BTW, the Yiddish word is pronounced  “noodge”--different from the gentle push word that is spelled the same way.)  A recent Sunday New York Times article described how nudging has now become a hot trend and a big money saver in government and increasingly, for private businesses.  This allows me the satisfaction of saying “Nyah nyah!” to those who worked with me and encourages me to believe that even small changes in sustainability practices may cause big changes in human behavior.

Finally, I thought I’d offer a second NY Times article (hope you won’t get caught by their paywall when you open it) on the effect of making auditors truly independent by having them NOT paid by those they audit.  “See Red Flags, Hear Red Flags” was written by Michael Greenstone of MIT and cites a number of studies that show how much better auditors behave when they know that raising a red flag will not cause them to lose a future assignment.  These results should pertain to sustainability reviews and audits, and further support the idea that these audits should be done by third parties rather than by insiders.

Hope you have a great holiday period and that we all get a more sustainable future (and maybe world peace?) in our stockings.

CSRHub provides access to corporate social responsibility and sustainability ratings and information on 8,400+ companies from 135 industries in 104 countries. By aggregating and normalizing the information from 290 data sources, CSRHub has created a broad, consistent rating system and a searchable database that links millions of rating elements back to their source. Managers, researchers and activists use CSRHub to benchmark company performance, learn how stakeholders evaluate company CSR practices and seek ways to change the world.