This week, Cynthia Figge, Co-founder and COO of CSRHub (full disclosure: CSRHub is my sponsor), reported at Sustainable Brands that the correlation between CSR and brand strength has reached .28. (A perfect correlation is 1.0) 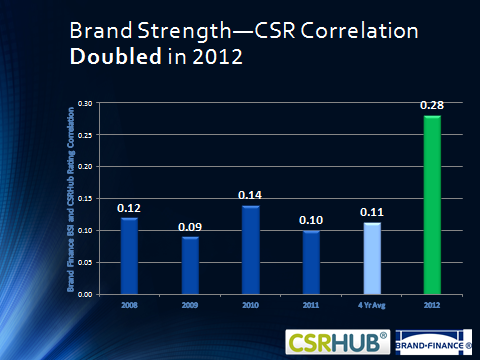 This number is truly remarkable!

First, look at it in absolute terms. In 2006, I organized the first study that proved a relationship between CSR and brand existed at all.  That study was considered such a breakthrough that I was invited to present the results at all the major sustainability conferences, from the Conference Board to SRI (Socially Responsible Investing) in the Rockies to the Wharton Sustainability Conference. All that excitement over a small, but significant relationship – a .05 correlation.

That 2006 study – conducted just six years before the CSRHub study – barely qualified for statistical significance. So the fact that the CSR/brand correlation reached .28 so fast is a very big deal. Of course, we used different databases back then. CSR outside the US wasn’t being tracked by US firms so our numbers were domestic only. The CSRHub study combined global data from Brand Finance, the UK brand value company, and CSRHub’s aggregated global information. Still, the rise was extraordinary.

In fact, so unbelievable that CSRHub’s CEO Bahar Gidwani, a self-admitted geek with degrees in physics and astronomy and a Harvard MBA, tested every permutation of statistical error. The numbers hold.

After waffling around during the grim days of recession and climate change denying, something pushed us into a new age of CSR.

Maybe it’s just that CSR has finally traversed the natural path of innovation. The numbers from 2006 to 2012 form an almost perfect hockey stick-shaped graph of innovation adoption, starting from the 20 years or so before 2006 with consistently low level of “innovators,” increasing over five years through the “early adopter” phase and now blasting into the “mainstream.” But why now?

Figge reported on the subcategories that carried the higher correlation. As expected, environmental factors had robust correlation due to the ubiquity of sustainability reports and environmental crises. But employee issues exerted an even stronger influence. Social media accelerated the impact of greater employee engagement and the accompanying word-of-mouth.

The relationship between social media and the growing influence of CSR on brand is underscored in a recent study from Cone Communications titled “Social: Where CSR Brand Leadership Is Won Or Lost” which says —

“Social media is transforming the CSR landscape… Citizens are universally taking to social channels to learn more about issues, share positive and negative information and influence their personal networks.”

They call this conversion of CSR and social media “The Era of CSR.”

I would argue that something else is also at play: a shift in culture from one tilted towards competition and force to one based on co-operation and kindness. Thanks to the environmental movement, our perspective is becoming longer-term and focused on preserving the commons, or the natural resources that we all share, rather than competing for them.

Evidence of the shift is most apparent in the younger cohort. We’ve seen acts of violence drop by half since 1994 among 10-24 year olds. GenY is showing a preference for the “sharing economy” in industries from cars to hotels to homes. David Brooks wrote last week about a young hedge fund trader who lives on a grad school budget and sends the rest off to Africa to find a cure for malaria.

Shifts in older cohort culture are also becoming apparent. In a much-praised book called “The Athena Doctrine: How Women (and the Men Who Think Like Them) Will Rule the Future,” author John Gerzema concludes that “…the only way to succeed when everyone knows your business is to act in an empathetic, patient, humane, and scrupulously ethical way” — traits he ascribes to being “like women.”

Even Apple, once the poster child for a winner-take-all American corporation and the one activists loved to hate, has undergone a dramatic shift. As reported in this week’s Fortune, “Ma Jun, the noted Chinese environmental activist, says Apple has gone in a short period of time from being the most uncooperative of electronics companies to ‘one of the most proactive IT suppliers’ of all.”

Surely “The Era of CSR” is upon us.