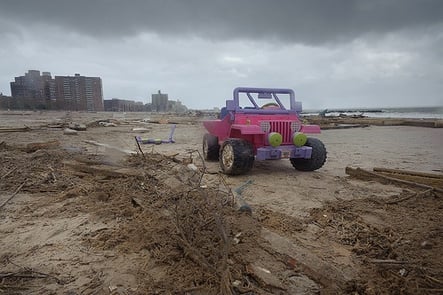 Happening Faster Than Expected?” in which the authors credit feedback loops with accelerating global warming at a rate much faster than scientists anticipated. The classic example is that global warming melts ice, reducing reflective surfaces and increasing the amount of sunlight that is absorbed by land and water, further heating the earth and melting even more ice.

Now thanks to Sandy, it looks like the U.S. could be experiencing a policy and communication feedback loop on climate change.

The environmental policy feedback loop has been negative for all of Obama’s presidency. It’s obvious that many climate deniers are aware of the hazards, but it’s also true that to change the system is a horrifically disruptive proposition, especially given the massive investments in fossil fuel industries, our chief creators of carbon emissions. The rich invest in oil and coal for their outstanding financial returns. The poor suffer through droughts and flooding.

And at first, it seemed like reactions to Sandy were going to be business as usual. Below 34th Street, the neighborhoods felt like Armageddon, with dark streets screaming with sirens and fear evident in every face on the street.

The next morning, word comes through that the power will be off for at least five more days. Without light or power, there is nothing to do. Without electricity to charge computers and cell phones, communication dries up. The feeling of fear and isolation grows.

New York Mayor Michael Bloomberg lives on higher ground, on the Upper East Side. In his world, the lights are on. Elevators work. Cafes are open. So it wasn’t that strange that in a press conference on Tuesday, Bloomberg, champion of big-city climate change policy, at first was not moved viscerally. He waffled, then bungled pronunciation when he attributed the storm to “secular or cyclical” causes. Despite his gold star record on climate mitigation, he could not use up political capital to respond to the issue directly.

Bloomberg no doubt felt compassion for those who had lost their lives or homes, but he did not feel the fear that would motivate him to address this provocative issue.

The media, having backed off climate reporting as politicians did, now insisted on linking Sandy to climate change. They started their own feedback loop, asking the questions hourly and featuring climatologists like Ben Strauss on news broadcasts, inciting each other to do more.

The politicians, who before Sandy avoided conversations about climate change like the third rail, then jumped on the issue. We watched Chris Christie, governor of New Jersey, and politicians from New York, Governor Andrew Cuomo, Senator Charles Schumer and Representative Jerrold Nadler address climate change with a new urgency.

Then, three days after Sandy, Bloomberg issued the strongest endorsement of climate change action: in an opinion piece for Bloomberg News, he credited his decision to support Obama as being, “A Vote for a President to Lead on Climate Change.” To his credit, Bloomberg “compelled all” to take action without admitting that climate change caused Sandy:

“Our climate is changing. And while the increase in extreme weather we have experienced in New York City and around the world may or may not be the result of it, the risk that it might be -- given this week’s devastation -- should compel all elected leaders to take immediate action.”

The media had a new story and the feedback loop accelerated. As Business Week’s headline of November 1 cleverly put it, “It’s Global Warming, Stupid,” replaying Bill Clinton’s 1992 campaign strategy “It’s the Economy, Stupid.” Climate change could well be the deciding issue for this Presidential election.

Activists geared up to start the feedback loop on November 7, the day after the election. Now they will feed it. 350.org will kick off a nationwide roadshow to spur a movement for divestment from the fossil fuel companies a la Apartheid. Up to now, that idea was unthinkable. But that was before Sandy.

After years of silence, the conversation that Sandy unleashed is looping back on itself, feeding a suppressed desire to do everything we can, not just to mitigate the effects of climate change but to try to slow it down. As nature has shown us, feedback loops generate energy to feed themselves and grow much faster than we imagine. Let’s hope this one will grow as fast as global warming.

CSRHub provides access to corporate social responsibility and sustainability ratings and information on over 6,000 companies from 135 industries in 70 countries. By aggregating and normalizing the information from over 170 data sources, CSRHub has created a broad, consistent rating system and a searchable database that links millions of rating elements back to their source. Managers, researchers and activists use CSRHub to benchmark company performance, learn how stakeholders evaluate company CSR practices and seek ways to change the world.