Is Environmental Pessimism on the Wane?

In March, I attended a pancake breakfast with residents of NYU’s Green House, a small 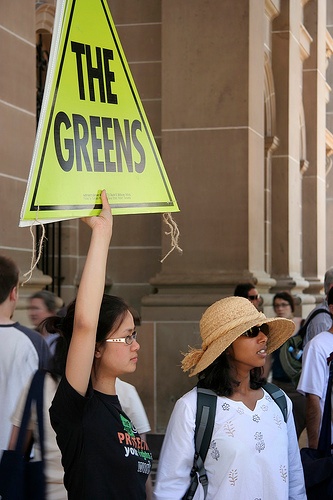 dorm set aside for upperclass students who want to “shrink their environmental footprint.” I asked one future biochemist what she thought about NYU’s environmental program. Her bright young face turned sour as she complained that her environmental studies were dominated by disaster science. Where was the hope, she wanted to know?

Her complaint explained a lot of what I was seeing. Interest in climate change is low among the Gen X cohort. Environmental protests have fewer young people than older. Low demand for slots at environmental graduate schools holds acceptance rates at an average 50% of applicants. How awful to hear it confirmed by a current member of this cohort: the message of climate change urgency is failing.

In his article “Pessimism Is Impeding Environmental Advocacy,” Richard Matthews explains the phenomenon:

Decades of research show that appeals to fear can easily backfire causing recipients to reduce the fear without reducing the danger, perhaps by denying that there is anything to fear or concluding that the fear appeal was a manipulation attempt by an untrustworthy source.

Paul Bain (School of Psychology, University of Queensland) and his colleagues conducted a study that shows that informing people about the expected impacts of climate change had no effect on their positions. What did change the positions was thinking about how limiting greenhouse-gas emissions might promote interpersonal warmth and scientific and technological progress. …Bain’s research shows that approaches based on hope work far better than fear.

Sandy hit New York on October 25, 2012. The pancake breakfast was over four months later. It seemed at that moment as though all the attention brought to climate change by the Superstorm might be feeding fear and not, as we had hoped, igniting interest in remediation.

But then, just this week, the zeitgeist seems to have altered.

Maybe it’s only a series of coincidences, but all sorts of mainstream and even conservative media has jumped on the good news about climate change

Bloomberg released its projections for renewables, citing 230% growth by 2030. Bloomberg’s chief executive of New Energy Finance Michael Liebreich adds, “What it suggests is that we are beyond the tipping point towards a cleaner energy future.”

Forbes Magazine published a statement from Ceres President Mindy S. Lubber about how corporations are connecting sustainable models to their own long-term self-interest. She cites Ford as an example: “Ford is on the leading edge of the development of a new generation of hybrids and electric cars. It is challenging Toyota’s dominance in this market in part.”

A report released by Carbontracker warns investors of a carbon bubble: “Greater understanding of the uncertainty and risk around fossil fuels can help the redistribution of these funds towards alternatives more attractive.”

And the web site that straddles both profit and planet, TriplePundit, headlined its April 22 edition with this: “Climate Change is Finally Real for the American People.” I urge you to read it. The author, Rosana Francescato, buttresses her argument that we’ve reached the tipping point on climate change with facts from opinion polls and quotes from military and finance leaders.

All this change in less than two months? Of course not. As Francescato says, “Belief in climate change has been progressing for years. Now we’re at the point where some of our most sober institutions are on board to deal with it, and they’ll be backed by increasing public support. With all these sectors of society working on the problem, we have a much better chance of solving it.”

I hope the message is getting to young people like my Green House friend. Climate change will definitely be the greatest challenge of their generation and even more galvanizing than sending a man to the moon. They’ll certainly have my gratitude.