Harvard Business Review just released their much anticipated The Best-Performing CEOs in the World 2017 list. CSRHub is honored to have our ESG (environmental, social, and governance) metrics included again this year as part of the methodology for ranking the world’s top 100 CEOs.

HBR wrote in its November 2017 article covering the ranking, “This year’s top performer—his first time in that spot—is Pablo Isla of Inditex… Measured on financial returns alone, Isla comes in 18th in our ranking; his company’s performance on environmental, social, and governance (ESG) factors, which count for 20% of a leader’s score, propelled him to the top spot.”

“If we judged CEOs solely on the basis of financial performance—as we did prior to 2015—the top-ranked leader would be Amazon’s founder, Jeff Bezos, who topped the list in 2014 and has been the best financial performer in every subsequent year. Since 2015, when ESG ratings became a factor in our ranking, Bezos has climbed from #87 to #76 to #71.”

HBR describes its methodology to measure ESG. Using Sustainalytics and CSRHub to calculate the final CEO ranking, “we combined the overall financial ranking (weighted at 80%) and the two ESG rankings (weighted at 10% each), omitting CEOs who left office before June 30, 2017.”

The HBR report shared, “Earlier this year Amir Amel-Zadeh of Oxford University’s Saïd Business School and George Serafeim of Harvard Business School published the results of a survey of 413 investment executives, whose firms collectively manage $31 trillion in assets. Half reported using ESG information because they believe it is material to investment performance, and nearly half said they believe that a company with a high ESG score is a less risky investment.”

At CSRHub we are encouraged by the increase in ESG metrics moving more into the mainstream. We hope that our broad, deep, and transparent CSR/ESG metrics and information will make progressive corporate social responsibility a norm that sustains businesses, society and our planet. As a B Corporation, our mission is to offer a public, affordable, and standardized measure of company ESG (environment, social and governance) performance that empowers our users to improve corporate sustainability.

CSRHub provides access to the world’s largest corporate social responsibility and sustainability ratings and information.  It covers over 17,500 companies from 135 industries in 133 countries. By aggregating and normalizing the information from 549 data sources, CSRHub has created a broad, consistent rating system and a searchable database that links millions of rating elements back to their source. Managers, researchers and activists use CSRHub to benchmark company performance, learn how stakeholders evaluate company CSR practices, and seek ways to improve corporate sustainability performance. 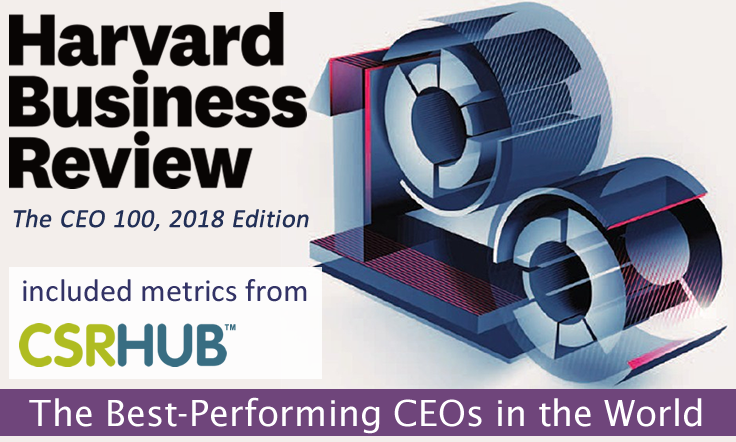